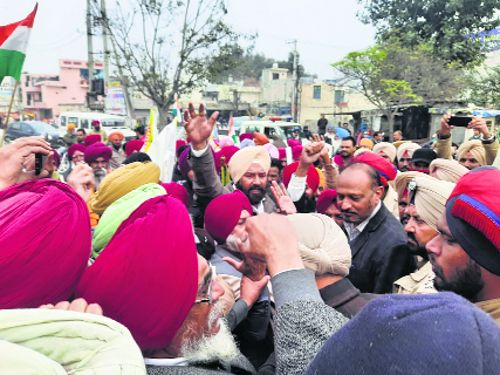 Family members of freedom fighters under the banner of the Freedom Fighters Successors’ Organisation, Punjab, today celebrated the birth anniversary of Netaji Subhas Chandra Bose in Sangrur by holding a state-level function.

They announced not to accept any honour from the government on Republic Day to express solidarity with protesting farmers against the central laws.

“Today, during a state-level function, we decided that we will not receive any honour from the government during Republic Day functions across Punjab to extend our support to protesting farmers. Our members are already participating in various protests against the farm laws,” said Harinder Khalsa, organisation president.

Meanwhile, tempers ran high in the city when police and officials of the civil administration stopped the family members of freedom fighters and members of social organisations from marching towards an under-construction sports ground, named after a Congress leader. The protesters wanted to uproot the foundation stone of the park to rename it after Netaji Subhas Chandra Bose to pay tributes to him on his birthday. — TNS