Several Congress leaders and MLAs visited PCC chief Navjot Sidhu’s residence here late Monday evening to “listen to his grievances and know from the horse’s mouth” the reason for his resignation.

Three Cabinet ministers — Razia Sultana, Pargat Singh and Amrinder Singh Raja Warring — and five MLAs — Kuljit Singh Nagra, Inderbir Singh Bolaria, Sukhwinder Singh Danny, Kulbir Singh Zira and Sukhpal Singh Khaira — were at Sidhu’s residence till the filing of the report. A source claimed Sidhu has said he is not willing to rethink “with present political changes in the government” and could not be a mere “puppet in the hands of the party high command”.

“I have promised to the people of Punjab that I will keep their interests above everything else and will not compromise on it,” he is learnt to have told his party leaders at the meeting.

The sources say the MLAs apprised Sidhu that his decision could backfire on those who had sided with him within the Congress. “We have asked him to have a rethink, if not for himself, for the Congress leaders who stood by him,” said an MLA, adding “Sidhu is in no mood for a compromise in his vision of Punjab”.

Party MLA Khaira said they had asked Sidhu, on behalf of the party leadership, to revisit his decision. Even if he was angry at certain decisions, the high command must try to reach out to him, he added.

People’s interests above everything else

I have promised to people that I will keep their interests above everything else and will not compromise on it. Navjot Singh Sidhu to party leaders

Khaira said if he was perturbed over certain appointments, MLAs/ministers concerned should approach him, instead of staying mum. Almost 100 senior party workers visited his residence and submitted their resignation. “We now swim or sink together,” said Mansimrat Singh Riar, joint secretary, Youth Congress.

Chandigarh/Amritsar: Hours after Navjot Singh Sidhu stepped down as PCC chief, treasurer Gulzar Inder Chahal, and general secretary Yoginder Pal Dhingra also resigned in solidarity. Chahal was handpicked by Sidhu. Dhingra’s resignation came hours after Razia Sultana quit the Channi government in Sidhu’s support. “I have sent my resignation to the AICC chief, but I will continue to serve Congress,” said Dhingra.

Hours after Sidhu resigned, senior party leaders in the AICC called up MLAs to ascertain their point of view. Four ministers who failed to attend the emergency Cabinet meeting convened by CM Channi were also contacted by leaders. Sources said the party wanted to know the support Sidhu had within the party.

Even as Razia Sultana’s resignation as minister is yet to be accepted by the CM, MLAs have started lobbying for the slot 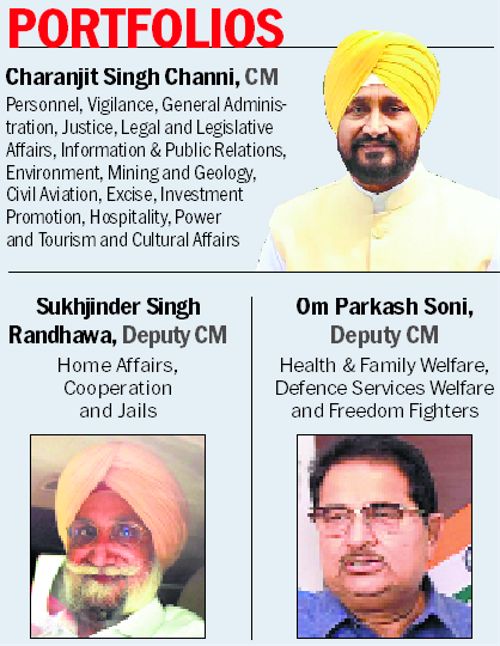 Sept 20: Channi takes over as CM, Randhawa, Soni are deputies