Indian students in Ukraine: Won't return, what will we do without a degree? : The Tribune India

Indian students in Ukraine: Won't return, what will we do without a degree? 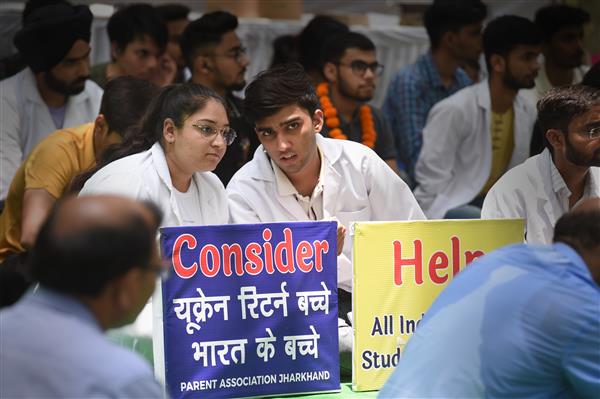 At least 1,000 Indian students pursuing medicine are staying put in Ukraine amid escalation of war between Russia and Ukraine, despite two advisories by the Indian Embassy urging Indian citizens to leave at once. The ‘dirty bomb’ threat has made the parents restless. Balwinder Sharma of Bhikhi in Mansa said his daughter Anshika and her friends had now decided against returning to Ukraine. “I took a loan of Rs 20 lakh to send my daughter to Ukraine, but this war has ruined everything. There has been no assistance from the Union Government. My daughter’s career is over and we have been hit financially,” he lamented.

There’s been no government assistance so far. My daughter’s career is over and we have been hit financially. — Balwinder Sharma, Bhikhi, Mansa

20K students were evacuated from ukraine

A final-year medical student, who returned to Ukraine despite the escalation, did not want to be identified. Contacted on the phone, he said: “We did not get any assistance in India. So, we returned to resume our studies. We can’t return now. To start from scratch is unthinkable. Besides, what will we do in India without a degree?”

Amandeep Kaur from Mansa said she had applied for a transfer to Georgia, “which is under process”.

Sahil Nain, another final-year medical student, who returned to Kyiv on September 30, has decided to stay put despite the risk to his life.