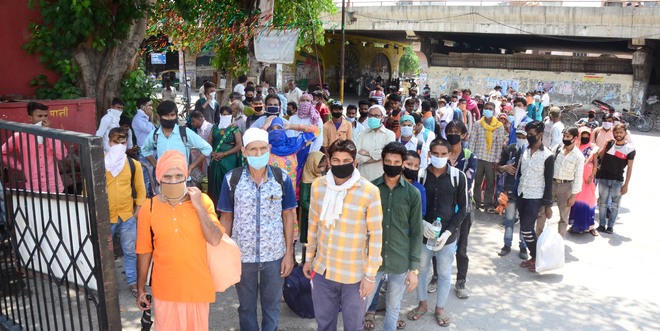 Migrants outside the Ludhiana bus stand on Tuesday.

With the hope of getting bus to their home states, hundreds of migrants reached Ludhiana bus stand from various parts of the district. However, they were asked to go back as the bus service is currently available to only those who have got approval from the administration.

The migrants were seen sitting outside the bus stand on Tuesday as they were not allowed to enter the premises. They demanded that direct bus service should be started to their respective home states at the earliest.

“My friends and I came from Tajpur Road to board a bus to UP. Somebody told us that direct buses are going to UP. Thus we reached the bus stand today after vacating our room. My friends and I were not allowed to the enter bus stand as we had not taken prior permission. We urge the government to start a direct bus service to our home state. We don’t have enough money to stay here as there is no work. That’s why I want to go to UP,” said Sewa Ram, a migrant worker.

Rajan, who worked in Machhiwara, said: “I have to go to Bihar. We are not being allowed to enter the bus stand. My landlord was demanding rent of the room. Now, I have left the room too.”

Station Superintendent at the bus stand Kuljit Singh Sodhi said, “Routine bus service has not been resumed yet. The migrants, who have applied online to go back to their home states, are being sent by special buses.”

Ludhiana: The Punjab State Human Rights Commission has taken suo motu cognisance of a report by The Tribune regarding the protest by migrants here on May 14 against the government’s alleged failure to make arrangements to send them to Bihar. Some migrants had accused the police of beating them up. The commission sought a report on the matter.