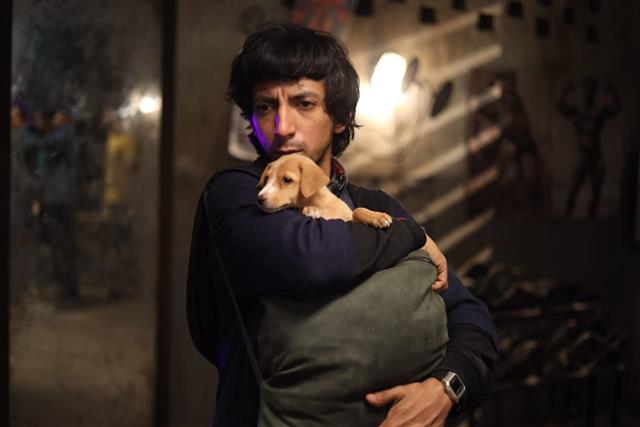 Kolkata has a vigilante–a young hoodie boy–who wouldn’t let harm come anyone’s way, specially those who cannot protect themselves. As his fan clubs are mushrooming, many aren’t happy.

The story follows Arjun (Anshuman Jha), who teaches martial arts to kids and works as a courier boy. He delivers the divorce papers to crime branch officer Akshara D’souza (Ridhi Dogra), who is struggling to catch this vigilante. Arjun’s love for animals brings the two closer. In comes her brother Aryan (Paresh Pahuja), who deals in dubious pet trade, and his striped lakadbaggha (hyena) and things get murkier!

This Victor Mukherjee’s directorial has its heart in the right place but average writing and execution stop it from reaching its true potential. In the acting department Anshuman Jha’s is an honest attempt – a boy coming of age, different yet special, a non-smoker, non-drinker, vegan hero riding high on his martial arts skills. He is good in action scenes. Ridhi Dogra as the leading lady makes for a good match to his fighting skills, and only holds an upper edge in looks and style department. Paresh Pahuja makes for a dapper antagonist. While one enjoys rap Practice Till I Crack This , the background score is edgy and unconventional. One wishes for better VFX.

It’s the screenplay that falters and characterisation is sketchy. While Arjun fights for the right cause, you do feel for his pets Shanku and Colonel, but as he fights mighty villains, you hardly feel for his cause. The film proudly ‘introduces’ Sikkim’s supermodel, professional boxer and cop Eksha Kerung, if only they hadn’t stereotyped her. Milind Soman has a blink and miss appearance.

If you have time to kill, do watch for the ball busting, bone crunching fight sequences superbly directed by Baaghi 2 and Baahubali 2 fame Kecha Khamphakdee. First Bhediya, now Lakadbaggha, one hails the films industry’s attempt to weave activism in narratives, if only execution was as fine as the intention. Lakadbaggha is running in cinemas.