Although the action is top class, even a battery of diverse stars can't catapult Netflix filmThe Gray Man into the above average category 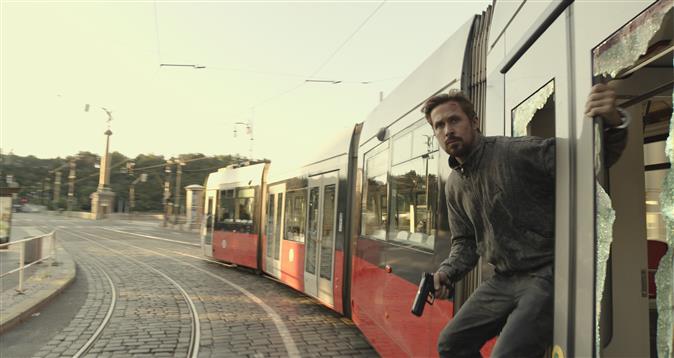 It sure is a much-hyped Netflix film from the stable of the famous Russo Brothers, who have delighted us more than once with treats from the realm of Marvel Cinematic Universe. The Gray Man sure comes studded with many a superstar. If the presence of dashing Ryan Gosling in the titular part is not enough, there is Captain America Chris Evans stepping into the shoes of this charming villain as Lloyd Hansen, a psychopath who derives pleasure in hurting others. Of course, Regé-Jean Page (of Bridgerton-fame) as Denny Carmichael, a CIA honcho can’t be missed either.

And for the Indian fans, here is the icing on the cake; our very own gifted Dhanush, who made has Hollywood debut with The Extraordinary Journey of the Fakir, is part of this biggie. But The Gray Man is a classic case of all the might of Russo Brothers and its battery of diverse stars, including the lovely Ana de Armas, can’t put this actioner above the average category. Indeed, the action is top class. The initial rushes in Bangkok have a kaleidoscopic feel to them. Amidst the riot of colours, we see men being shot and killed. On the direct instructions of CIA, assassin Sierra Six (Ryan Gosling) takes down men and an interesting revelation about the agency’s underbelly is made.

But as the cards are laid on the table early on, there isn’t much surprise in store. The plot moves on expected and convenient lines, at times even unfolding like a spoof. Even though a high octane chase drives the narrative the outcome is writ on the wall. Wham bam bang bang... Much here is formulaic and reminds you of movies of similar genre. Certainly, Chris Evans make his charm and charisma felt as the bad man aka contract killer Lloyd Hansen, who delights in torturing his subjects/enemies. The way he utters the word ‘boring’ as he grills his adversaries...You are tempted to dismiss the film with the same epithet. But his over-the-top act, letting loose an army of his men to get a single man (who else but Ryan’s character) prevents the film from being an outright dud.

Taking us from one exotic country to another, the drama ropes in the abduction of a young girl, heavy dose of filial love, the corruption of powers that be, the rot in the system and more. Predictable, it does not offer anything novel, except the chemistry between the hero and the anti-hero. If one is understated, the other is outright flamboyant and the face-off between them is imminent. As is all else. No need for guessing games as there is little to ‘guessticulate.’ Actually, even though based on the book by Mark Greaney, there is no layering, no nuance. The Gray Man’s grey shades are all but missing. Except for the fact that he is a killing machine and has a sinister back-story, much that he does falls in the very moral realm.

Dhanush as a mercenary plays on the right side of morality too. And, if your reasons for watching the film hinge primarily upon the gifted Tamil actor’s presence, brace yourselves for some disappointment. But for flexing his muscles rather deftly and mouthing an inane one-liner or two underling his honourable stance, the lone wolf (so his character Avik San is referred to) hardly gets enough screen time to let his intensity blaze this action blitzkrieg. But of course, a lightning action war The Gray Man certainly is....If flying cars is your thing, here there is added bonus—you even have trains flying off the tracks! Strictly for action buffs, both Gosling and Evans with wondrous cinematography by Stephen F. Windon make it worth your pound of action time.