Cameron gets his way... : The Tribune India

Cameron gets his way...

Film: Avatar: The Way of Water

It’s a bewitching world that James Cameron builds for us. Those of us who have seen the 2009 film Avatar know this surreal, spiritual world, the forest galaxy of Pandora and its principal protagonists. However, Jake Sully human turned Na'vi, now chief of the Omaticaya and love of his life Neytiri are not the only centre of attention here. As with all love stories, theirs has progressed into a family of six including two sons, a daughter and an adopted one and as the catch-line goes ‘Sullies stick together’, theirs is close knit one. 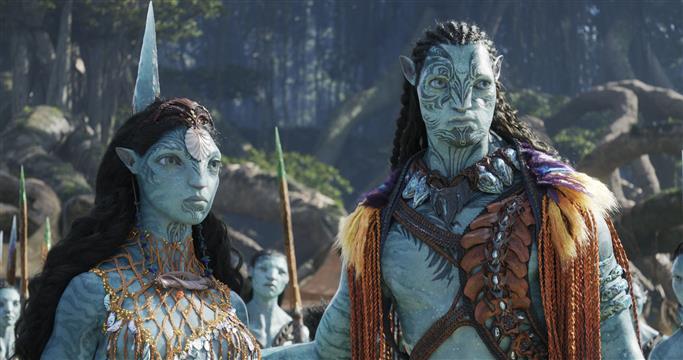 Since one of the many pithy one-liners tells us, “The thing about happiness is it can vanish in a heartbeat,” happily ever after is about to change. Under attack from humans who want to colonise Pandora, the magical forests of Na’vi, the greedy human race along with their might use Na’vi Recombinants to get the better of Na’vis. Jake Sully in particular is on the hit-list of Colonel Miles Quaritch, now resurrected as Na’vi avatar.

Predictably, the stage is set for a faceoff. Or, so you believe and brace yourselves for some gravity defying, mind-boggling action. It comes, but take your time and hold your breath. For in this stupendous sequel, before the battle royale commences, Cameron entraps us in the world of water with frames that are now illumined, now majestic but never ever ordinary.

As Jake, who believes the first duty of a father is to save his family and decides to leave Pandora along with it, finds refuge among Reef people of Metkayina clan. And, thus we become privy to some stunning underwater spectacles, mounted on a scale that is as magnificent as mammoth tulkun, an intelligent and pacifistic cetacean species.  Jake’s younger son Aonung befriends one called Payakan and as they swirl through the vast expanse of waters, the first lesson on balance and co-existence with other species is served.

But more importantly, we are in for a visual feast set underwater. Actually filmed underwater with the cast in what is called performance capture underwater, needless to say this blending of underwater filming and motion capture system is one of the highpoints and challenging aspects of the film.

While the narrative follows a standard family drama arc, with children being held hostage, interestingly on both sides, by the time the film climaxes ‘son for a son’ acquires a new meaning.  Though the film packs familiar familial emotions in ample measure, “anything to save the family,” it’s a cinematic marvel purely for its visual extravagance.

With production designers Dylan Cole and Ben Procter, visual effects supervisor Joe Letteri visual designer and cinematographer Russell Carpenter in tandem, we are transported to an out of this world experience which is immersive and fantastical at once.

Despite a runtime of over three hours, the film never stops engaging you. Drama rolls over as does action, which is breathtaking as actors whizz past in supersonic speed riding magnificent creatures, executing some whistle-worthy moments. While Sam Worthington and Zoe Saldana reprise their parts and so does Stephen Lang and there is Kate Winslet too in a key but relatively smaller role of Ronal, who leads the Metkayina clan with Tonowari, actors in their Na’vi and other avatars are mostly unrecognisable. But then the real star or shall we say superstar here is the way Cameron unspools visual wizardry. Musical score by Simon Franglen complements the core of the film. Yes, with Spider, a human inhabiting the same world as Na’vis and bonhomie between Reef people of Metkayina clan and Na’vi’s first family we get the message of harmony and the need to save the environment too is packed in. Fact that humans are ready to kill colossal tulkun for the age-defying elixir is telling.

But, the film does not dwell inordinately on its messaging. The final takeaway here is not spiritual but visual. And herein Avatar The Way of Water offers an all encompassing hypnotic view. Precisely the reason not to miss the nearly $ 400 million astounding vision of its creator Cameron.