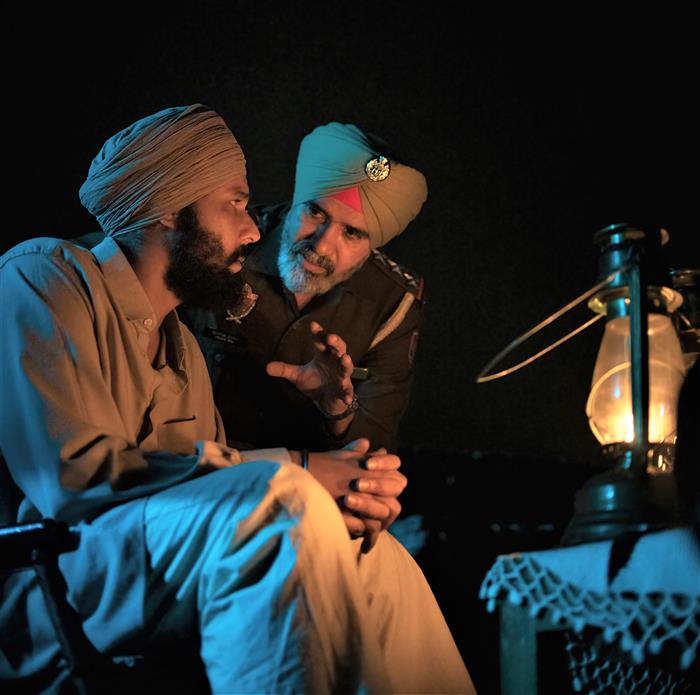 A still from CAT

Drug menace in Punjab is not exactly a state secret but an open one. Nor is CAT, the first celluloid attempt to untangle the politician-drug smugglers-dealer-police nexus.

The Netflix web-series is as much a personal story of an innocent man caught in the crossfire of bloodshed and gunfire as the state that it’s set in.

Connecting two timelines, the period of insurgency and the Punjab in mid 2000s rocked by the drug problem, the show runner Balwinder Singh Janjua builds a suspenseful drama that is dark, thrilling and above all, authentic. The flavour is unmistakably Punjabi—slice of Punjab served sans stereotypes or tropes.

In a non-linear narrative, the eight-episode series goes back and forth in time. The year 1990, when militancy was rife, is a significant marker in the life of Garry urf Gurnam Singh (Randeep Hooda). How his personal battle, murder of his parents sucks him into the life of a police informer, a mole, who infiltrates terror groups and later drug syndicate, takes the storyline forward, leapfrogging from one difficult era to another.

And authenticity remains the hallmark of this largely Punjabi web series headlined by talented actor Randeep Hooda, who melts into the titular part with incredible prowess and credible relatability. Be it the way he ties his turban or rolls out chappatis for his younger brother or slowly and surreptitiously like a cat finds his way into the drug mafia... not for a moment is he Randeep the star. The actor in him shines with restraint and ease. Other actors too seem born to the parts. Be it Dakssh Ajeet Singh as Laadi or Suvinder Vicky as poetry spewing Shetab or Geeta Agarwal Sharma as Madam Aulakh the ruling MLA. If Vicky’s chameleon act unfolds bit by bit, Dakssh is every bit the disgraced sportsman turned drug dealer. Geeta’s mannerisms convey all that is there to her politician/criminal part. Every bone of her conveys a mean streak and the strength within too is writ in her stance.

Of course, writers (Janjua, Rupinder Chahal, Anil Rodhan, Jimmy Singh) open too many fronts like Punjabi’s obsession for migration to Canada, craze for Punjabi singers, even caste identity by way of Hasleen Kaur as Babita is thrown in. All of the subplots, of course, are true to Punjab’s soil, but can’t be fully justified in a series essentially about drug peddling. Then there is more than one back-story. Aulakh’s past travails for instance are meant to humanise her. . In fact, we get to see the vulnerable side of Laadi too. Despite grey shades of few, the overall tone is dark and bleak.

Well shot by Arvind Krishna the cinematographer, the despondent hues of terror times and the equally dismal period of drug-driven Punjab reflect in every frame. Indeed, trying to connect the threads of terror and drugs is certainly not an easy game but fraught with risks. Dark days of Punjab are not easy to handle cinematically. But without taking sides, Janjua tries to show things as they were. He does not flinch to show when innocent men of a particular community are taken off the bus and shot dead or when a similar fate is meted out to terrorists.

Attvaadi changa ya maada nahi hoonda, attvaadi attvaadi hoonda hai... goes one dialogue as uttered by policeman Sehtab. But of course, the series does not cover the police force in glory. We see them as merciless, corrupt and above all as tribe of self-seeking exploitative men. There are telling moments, equally chilling too as Sehtab after a point-blank murder tells his junior ‘chal suicide bana’, or gives instructions on changing the identity of the dead person.

As for the identity and fate of our key man the CAT, needless to add there is a possibility of second season. Cats after all have nine lives. How this one manages to avert danger and suspicion lurking at every step makes this web series an exciting and thrilling ride.

Steering clear of over-exaggeration and melodrama yet packed with enough dramatic and nail-biting flourishes, CAT grabs your attention and easily ticks the watch-worthy meter.