Jogi that takes us to the harrowing period of 1984 anti-Sikh riots, called for more forceful and poignant storytelling : The Tribune India

Jogi that takes us to the harrowing period of 1984 anti-Sikh riots, called for more forceful and poignant storytelling 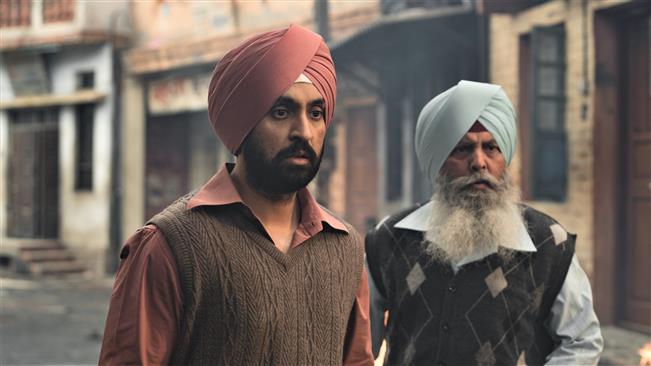 Anti-Sikh riots of 1984 are without doubt one of the worst blots on the secular fabric of India. Nearly four decades may have passed since the horrific dance of death snuffed out lives of innocent men, women and children in the streets of Delhi, but the wounds still fester and memories haunt us. As Jogi revisits this dark chapter in our contemporary history, what we expect is a sensitive and heartrending portrayal of the events that scarred a community and the nation.

Sadly what we get is an over dramatised version that is rooted in truth alright but is lost in celluloid translation. The film set four months after the Operation Bluestar, opens with a happy family scene. The titular character Jogi (Diljit Dosanjh) is involved in an amiable banter with his family members. Soon, post Prime Minister Indira Gandhi’s assassination, tragedy unfolds and Sikhs are targeted for who they are that is their religious identity. Hamari galti kya hai, quizzes Jogi and the repartee of aggressors “Tum Sardar ho” speaks volumes about religious bigotry. Streets turn into gruesome display of human barbarity. Caught in the crossfire of hatred and violence, the family too burns and amidst the tragic turn of events Jogi emerges as the saviour of Sikh community.

He ferries them in a truck with the support of his friends one of whom is a Muslim and the other a Hindu, in keeping with secular values that the film ultimately cares to espouse. The rescue operation is mounted like a thriller and has a few heart-in-the-mouth moments. But repetition of certain scenes which intercut the narrative, rob the atmosphere of fear and violence and dilutes the tension.

While the film does not get caught in politics overtly, the hate politics of the cataclysmic period does manifest and has a face in the shape of a councillor of Trilokpuri. Kumud Mishra brings out the monstrous shades of this devilish and power-hungry politician Tejpal until Ali Abbas Zafar makes him a cardboard character. Even a gifted actor like Mohd Zeeshan Ayyub doesn’t get to find much leeway as the cop Rawinder Chautala, who follows the ‘a friend in need...’ dictum in all sincerity.

As for Diljit, who has previously impressed us tremendously in a film around the same time and similar subject (Anurag Singh’s terrific Punjab 1984) is hemmed in by the writing and limited vision of the director. Yet, he makes the most of the material that is given to him. A backstory with a love angle (Amyra Dastur looks fresh and pretty) thrown in is totally unwarranted. All this interjection does is flesh out Hiten Tejwani’s part of Laali whom we see as friend-turned-foe.

Sure we get it, the film is more about friendship in trying times… but the Hindu-Muslim-Sikh triumvirate here seems more formulaic than organic. Indeed, the period that showed human bestiality is dotted as much with inhumane acts as with those of sterling courage and peerless humanity. But the film fails to capitalise on its premise of hope in dark times. Its attempt to tap into the sentimental core is sapped of solid emotional connect except for a few moments close to the climax which anyway is overplayed.

Where the film scores is how it depicts Sikh characters and even minor ones seem genuine. The director of photography Marcin Laskawiec captures the aerial shots well. Set design and costumes too look authentic. Wish we could say the same about the film as a whole. An important subject like this called for a far better manner of story-telling. While we agree with Diljit that what happened in 1984 was genocide, his other assertion that ‘it is important that a story is said in a credible yet sensitive manner’ does not apply wholly to the film. Streaming on Netflix, it could and should have been far more poignant and forceful.