Laung Laachi 2 is a love triangle in the backdrop of Partition : The Tribune India 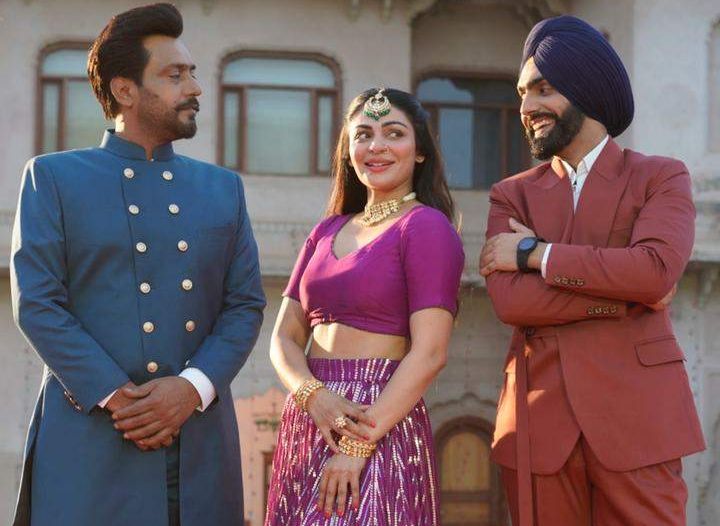 Making a sequel is a tricky business, but actor, director and screenwriter Amberdeep Singh takes the daring step to bring Laung Laachi 2, four years after the original hit the cinemas. Neeru Bajwa, Ammy Virk, Amberdeep Singh retain the lead roles, and the story this time unfolds in 1947 as people are being displaced due to Partition.

Unlike the other cinematic outings of one of the most unfortunate incidents in the Indian history, this film starts on a comic note. Mehnga (Amberdeep Singh) lives with his family in his dilapidated house. He is using the ‘opportunity’ of displacement to loot things to better his economic condition to marry off his sister. He takes over a haveli, only to find the old Muslim family still in it. Smitten by the family’s elder daughter Mariam (Neeru Bajwa), the two families reside together till they find a safe passage. While romance is brewing between the rather ill-fitted couple, Karnail (Ammy Virk) and his family come to live in the haveli and the story gets tangled. Trying anything with Partition comes with challenges. Setting a romance in the backdrop, and a happy-go-lucky drama is one daring attempt. But between a novel, love triangle, Hindu-Muslim-Sikh union, the plots gets muddled and the story loses its grip.

What works is brilliant Mariam. Neeru Bajwa retains her crown as the reigning queen of Pollywood. She looks beautiful in shararas and gowns. She emotes, dances and holds the viewers’ attention. Ammy Virk as serious, literary type justifies his character. While one feels for Amberdeep’s character, now that he has decided to be a ‘hero’ he must work to look the part. Theatre veterans Sahib Singh and Kuldip Sharma as Nawab and his Man Friday lend able support to the lead cast. Gurmeet Sajan as mama is an endearing character.

Only it’s the over ambitious story that undermines what looks like an honest attempt. At two hours and 18 minutes the film’s pace is rather slow, changing tracks too many times. The situations look contrived as do the attempts at generating humour. Music by Gurmeet Singh is passable. Though the title track by Simran Bhardwaj is yet to garner the love that its predecessor Mannat Noor’s hit did, it’s beautiful and choreographed very well. The film paints a rosy and idealistic picture that one wishes were true!