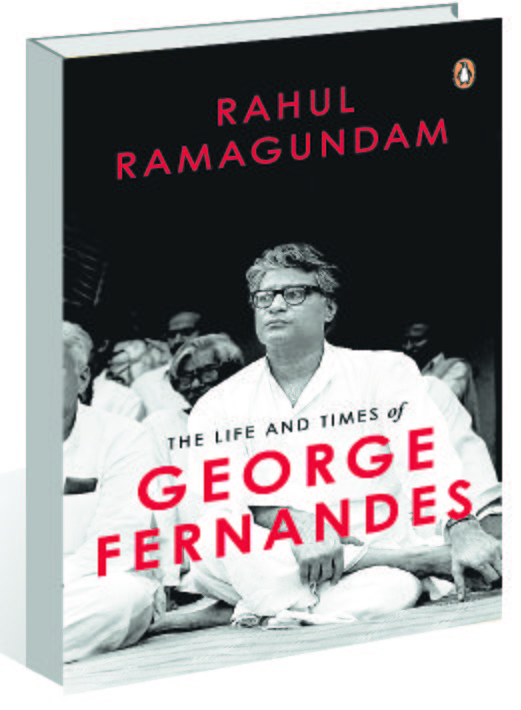 Book Title: The Life and Times of George Fernandes

George Fernandes has been among the tallest political leaders of our times, not just because of the offices or ministerial positions that he occupied, but more because of the fiery brand of politics that he symbolised. As is said, he was never for the establishment, but for the people. His life and times have been a story of non-conformism, both in politics and in personal life. From being a Lohia acolyte, he became a ‘fellow traveller of Hindutva’. Controversies accompanied him in his last days when his wife Leila Fernandes reappeared and Jaya Jaitly, his long-time confidante, receded from the scene.

The book, a biography, is about a leader who was as much in public glare as he was unknown beyond a point in many details. It traces his life — from his rise when he won in the 1967 General Election, defeating Congress stalwart SK Patil, to his association with Ram Manohar Lohia and friendship with leaders like Madhu Dandavate. George Fernandes was always living among the masses, drawing his strength from them.

Individually, he adhered to an ideology, but his political journey saw it being circumvented. Criticism followed when he defended the Gujarat riots and absolved the Bajrang Dal of any role in the brutal burning alive of Graham Staines and his sons. With the exception of Charan Singh and Chandrashekhar, none of whom made him a minister in their short-lived Cabinets, George Fernandes was loved by all his Prime Ministers — from Morarji Desai to Atal Bihari Vajpayee, and was like a trouble-shooter, what probably Pranab Mukherjee turned out to be in Congress governments.

It is said that in his eagerness to nail SK Patil, whom he accused of hobnobbing with smugglers, George strengthened Indira Gandhi in her factional feud with the erstwhile Congress colleagues. His own political emergence coincided with the consolidation of power by Indira Gandhi. Running a minority government, she manoeuvred outside political space to cut short the opponents within, finally coming into her own in the 1971 General Elections.

During the Emergency, when Indira Gandhi said that the Emergency was having a positive effect, George Fernandes criticised her for instilling fear among the people. He had been visiting Gujarat, a bastion of Opposition politicians, to strengthen his resistance movement. The Congress made a virtue out of it by telling that it was an eloquent evidence of India’s functioning democracy. However, after the Baroda Dynamite case happened, the Janata Front government in Gujarat was accused by Indira Gandhi of conniving with the dynamite conspirators and ended up being dismissed.

In his later years, George Fernandes became a prisoner of Nitish Kumar’s electoral arithmetic. George won the Lok Sabha elections twice from Muzaffarpur until Nitish Kumar made him change his constituency to Nalanda. George had no role to play in the anointment of Lalu Prasad Yadav as CM, but hedged his bets on Nitish Kumar, who had fallen out with Lalu and wanted his ouster over the misrule. Samata Party was formed. George could have been of use to Nitish Kumar, but he found himself irrelevant among the new crop of politicians.

George Fernandes had to face the heat over scams in defence purchases with the Congress accusing him of “stealing money out of coffins meant for martyred Army jawans”. The Congress moved a no-confidence motion in August 2003, with defence and national security as the thrust. It also asked why George Fernandes had been reinstated after he had said at the time of his resignation in 2001 that he would return only after being exonerated of all charges. PM Vajpayee ultimately came to his rescue, giving him a clean chit.

George never penned a memoir, so engaged was he in his life and activities. This biography is the result of an exhaustive research and the writer admits that he got “too immersed in microscopic detail and was unable to see the whole picture”. He found himself “in a deep sea of historical facts, assailed from every direction with uncertainty and tentativeness”. The result is an apt introduction to the life and times of George Fernandes.