ShabaashMithu, biopic of former captain of women's national cricket team Mithali Raj, may not hit the ball out of the park but touches the right chords 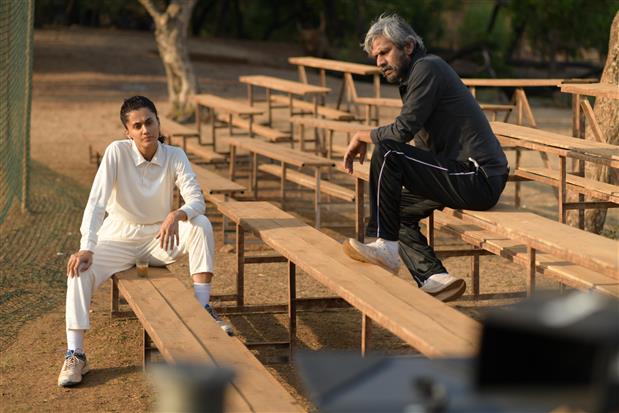 Sir hamari bhi koi pehchaan hai, hum bhi to India ke liye khelte hain…With these words, director Srijit Mukherji sets the pitch of the film. In a cricket-obsessed nation where male cricketers are no less than demigods, how many of us can rattle off the names of five women cricketers? In the answer lies the tone of the biopic of former Test and ODI captain of women’s national cricket team Mithali Raj. And the narrative underlines time and again the insurmountable obstacles women cricketers face.

No wonder in childhood years it is not Mithali, but her brother who is being trained for cricket. How she moves from Bharatnatyam to cricket, forms the earlier part of the story. In a way, the story of Mithali Raj is that of women’s cricket neglected/ignored for too long. Only expected, much of the run-time is devoted to the challenges before Mithali and the women’s team, who have to bear with unfair treatment and discrimination.

One particular scene at the airport where the women team set to represent India is made to offload excess baggage while its male counterpart gets a rousing reception is a telling pointer of the way things were. Or perhaps still are. But the movie, while listing the uphill struggle, celebrates the achievement of Mithali as well as how she led the Indian team to the final of the 2017 Women’s Cricket World Cup.

More than once the film touches your emotional chords, the credit for which goes to the director as well as the cast. Taapsee Pannu in the titular part does not hit a single false note, as her body language is befitting a cricketer. Vijay Raaz as her coach is, like always, phenomenal. The child actors Inayat Verma and Kasturi Jagnam, playing Mithali and her friend Noorie, deserve a special round of applause. Cricket mein sab se zaroori kya hai and pat comes the innocent answer—dosti.

Mercifully, this precious childhood friendship with Noorie who puts her on the path of cricket is heart-warming. Even otherwise, there are no unnecessary distractions or unwanted romantic angles. Sure, rivalry with the team captain when Mithali is inducted in the team surfaces to add spice to the sports drama.

Till the first half, the proceedings race to an emotive moment. Post intermission, however, the film sags a bit especially when a dejected Mithali decides to quit cricket and begins to pursue ‘womanly’ interests. Only as expected of an inspiring sports biopic, it can only culminate on a high note. By now even the peon in the cricket association knows Mithali’s name. But does the film introduce us to more names? Only briefly and sketchily. And that is its biggest drawback...Sure it’s a biopic.

Even, if it does not give us ball-by-ball account of Mithali’s sporting feats, it is meant to laud the leading run-scorer in women’s international cricket and the first player from India, male or female, to score 2,000 runs in T20Is. But cricket we know is team spirit and the two-hour-forty-minute film could easily have put the light on others and we could have walked out of theatres with more than five names on our finger tips.

Nevertheless, Shabaash Mithu is an inspirational film, which may not hit the ball out of the park but has us teary eyed. The odyssey of women’s cricket vis-à-vis men’s cricket might be akin to suraj ke aage jugnu chamke...But the light of this firefly deserves to be seen.