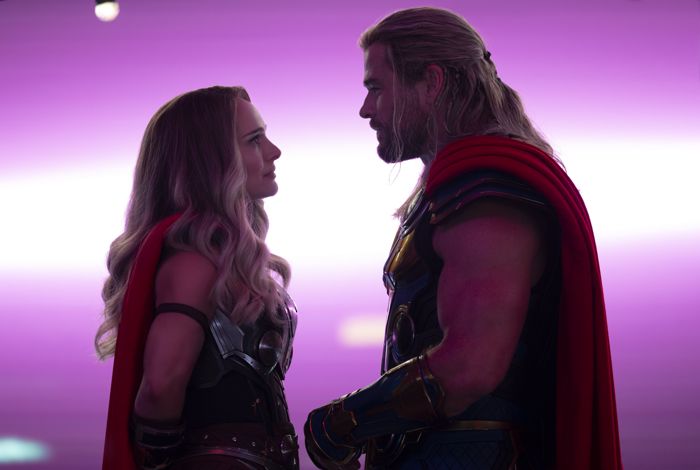 For every protagonist there is an antagonist, for every saviour a destroyer...so even before the screens are set afire with god of thunder aka Thor, we get to meet his nemesis in the sequel to Thor: Ragnarok. It helps that the villain of the piece Gorr, ahem the God Butcher, is played by none other than gifted Christian Bale as he owns the part and lives it with menacing sharpness and later a touching humanness.

Interestingly, Chris Hemsworth as Thor not only shares screen space with Bale but a bunch of stars and superstars. Apart from the Guardians of Galaxy team, there is Russell Crowe and Tessa Thompson and the director Taika Waititi himself as motor-mouth Korg, a Kronan gladiator who befriended Thor.

The prologue lets you into what has pushed Gorr on god killing spree. And a back-story fills in the gaps of Thor’s past adventures and misadventure including his obese avatar and transformation back to the hot bodied one with rippling muscles which we get to see more than once.

Since, this 29th film in the Marvel Cinematic Universe comes with the tagline love and thunder and since more and more Hollywood films, including the superhero ones are developing an emotional core, you can only expect a solid love angle. So, there you have lovely Natalie Portman as Thor’s love interest Dr Jane Foster from the past making her entry. And what a swashbuckling one it is. But is this fourth solo Thor film a classic Thor adventure as Chris keeps on reminding and reiterating. Well, catchphrases abound for sure. Mirthful one-liners make you chuckle in a steady torrent. The writing by Waititi and Jennifer Kaytin Robinson also duly tips the hat to other films like Interstellar and actors too as Natalie’s character is initially deliberately (mis)introduced as Jodie Foster. Besides, Russell Crowe as Zeus The king of the Olympians brings many a smile on your face with his fine cameo and some whistle-worthy dialogues.

Despite the visual scale, a given in Marvel Cinematic Universe and some scintillating action and cinematography by Barry Baz Idoine (watch out for the way Omnipotence the city of gods is mounted), in this outing of Thor love steals the thunder more than lightning action. The climax heightens the emotive aspect even more so. And the charm of Chris Hemsworth is unwavering. You see him as much as a warm and endearing human as one with super-heroic abilities and qualities. Tessa Thompson’s part as Valkyrie has nuances in touch with modern gender just world underlying her alternate sexuality too. Natalie Portman has a meaty part wherein she turns into Lady Thor, no Mighty Thor, as she corrects Gorr who addresses her as the former. Wielding Thor’s epic hammer Mjölnir with precision she not only romances the handsome hunk but matches his warring skills like a true blue warrior of Asgard. Never mind that by profession she is an astrophysicist suffering from cancer stage four. The film, however, does not suffer from any depressive disorder. Light hearted in tenor and feel, even when you are face to face with a black and white realm where Gorr’s powers are intensified and children have been kidnapped, there is a magical feel to this surreal world.

And even as the end moves you emphasising how all quest is finally about love and a tragic twist is in the offing, you walk out of theatres with feel-good factor intact and a heartening epilogue with a promise of yet another face off, likely between Thor and Hercules. Yet, another post-credit scene is equally heart-warming adding immensely to the movie watching experience.