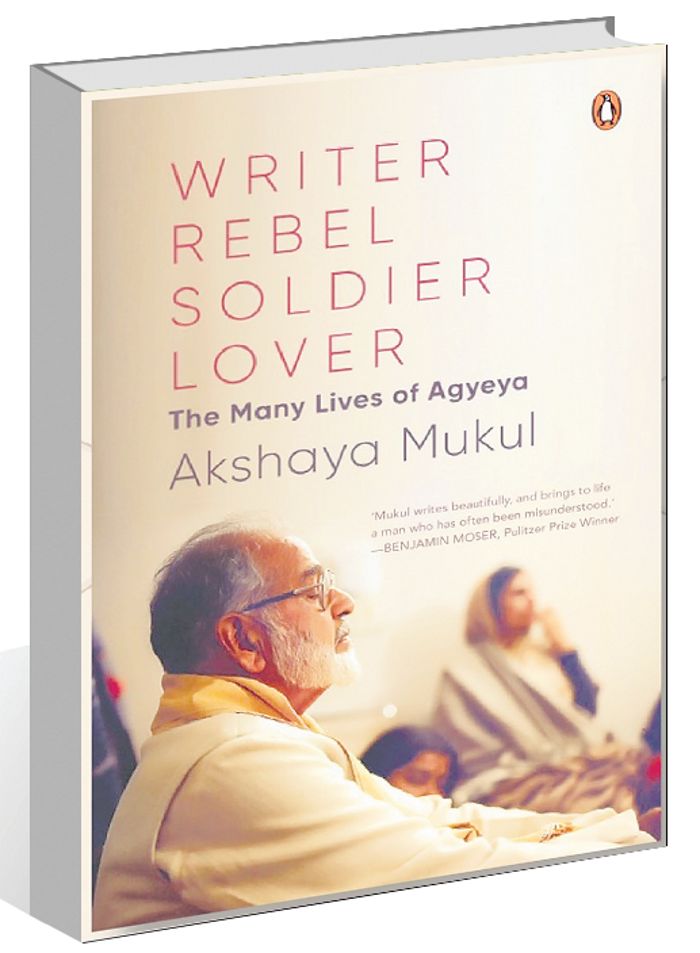 This is not a book for the dilettante reader or those who have weak wrists. With notes, references and acknowledgements, it is a hefty 800 pages and densely written. That said, it must be placed on record that this is how biographies of eminent persons ought to be tackled. Mukul, well-known for his earlier book on the Gita Press and the creation of Hindu India, was widely hailed for his documentation (as opposed to an anti-fascist rant) of this important publishing house and its socio-cultural and, later, political impact.

Mukul’s work on Agyeya is cast in the same mould. His research is astonishing as is his dogged pursuit of material, both here and abroad. At the core are some 20 trunks of papers meticulously maintained by Agyeya himself. Not a word Mukul writes is based (as sloppy biographies often are) on gossip and hearsay. This is an admirable feat of scholarship and one looks forward to the biography of JP that he is currently working on.

Sachchidanand Hiranand Vatsyayan was dubbed ‘Agyeya’ by Premchand himself — an apt description of his restless, searching mind. Several contemporaries considered him a maverick, a gadfly who constantly flitted between politics, literary writing and a long list of sexual and emotional involvements; the truth is that Agyeya was essentially a person who no one, not even he himself, fully fathomed. His literary output spans poetry, drama, novels, political pamphlets, public lectures and broadcasts but the ones that matter most for those who wish to savour him are two autobiographical novels: ‘Nadike Dveep’ and ‘Shekhar: Ek Jivani’. Locked into these books are a host of personal doubts and relationships that made him a writer, rebel, soldier and lover.

Agyeya was nothing if not honest and although some may cringe at his treatment of the women in his life, it must be also appreciated that he did not linger over dead relationships, whether of the head or the heart.

The book begins with Agyeya’s birth in Kushinagar, near Gorakhpur, where his father — the scholar-archaeologist Hiranand Shastri — was digging out an important Buddhist burial site. This leads to the uncovering of Agyeya’s complex love-hate relationship with his father. As was common in those days, his mother was left to look after the large family with no emotional support from Hiranand. Agyeya’s lifelong interest in the psychological novel and his own literary work stems from the relationships with his siblings and father after his mother died, alone and unsung. Equally important is the life he chose to follow, often to defy his father’s overpowering presence because he held the purse strings. As a study of the extended Hindu family, this provides an interesting perspective on the suppressed desires and sexual deviations mostly hidden from public view in these kinship ties.

Just as ‘Shekhar: Ek Jivani’ explores the making and travails of a rebel, Mukul then gives us a detailed account of Agyeya’s days as an underground revolutionary that landed him in jail as a marked man. His ruminations there on the deep philosophical questions and ideological doubts that haunt many such young men form a vital core in this landmark novel. Agyeya, often hailed as introducing the psychological dimension to the Hindi novel, was a character fit for a Freudian study of its own. Occasionally, one wishes Mukul had kept control on the details but then, given the enormous canvas that he was working on, this would have weakened the narrative of an extraordinary life.

It is often said by literary pundits that critical theory, central to a Marxist worldview, is missing in Hindi literature. I would encourage them to read the early history of the rise of progressive writing and the fledgling publishing houses run on shoestring budgets in the early decades of the last century. Benaras and Allahabad were then where the most liberal and brilliant writers lived. Names that have vanished in the mists of time: Yashpal, Jainendra Kumar, Makhanlal Chaturvedi, Chandragupt Vidyalankar, Banarsidas Chaturvedi, Sumitranandan Pant, Nirala, Mahadevi Verma… the list is endless. Between them are the rise and fall of the Romantic and Nayi Kahani movement. To write of this and of Agyeya’s later experiments with the Rashtrabhasha project and All India Radio, the Sahitya Akademi and his public lectures and writings without ignoring any part of this polymath is a feat that I can only salute.

As a chronicle of the life and times of a doyen, this book has few equals.