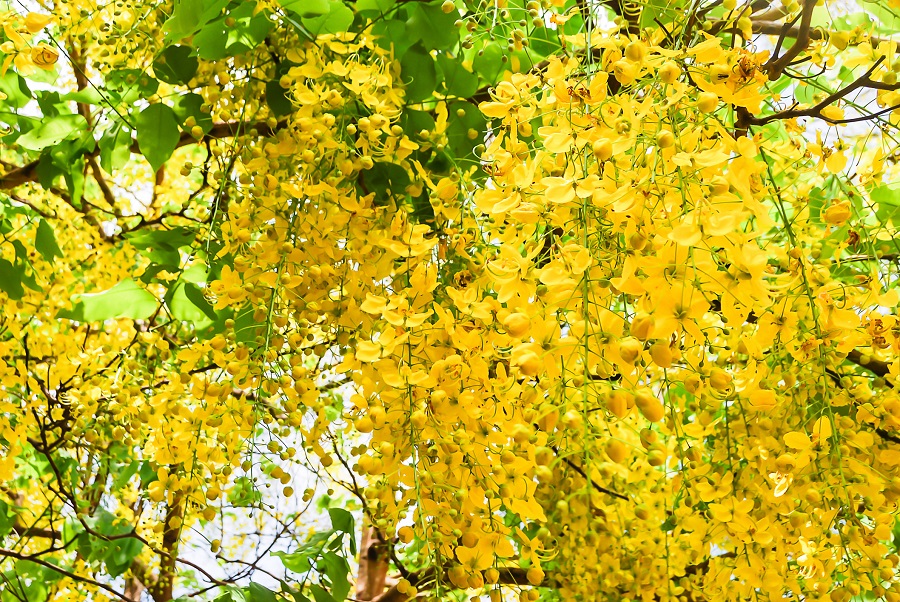 Cassia fistula popularly know 'Amaltas' or 'Golden shower tree' dots the sky during peak of summers starting from mid-May to mid-June and even beyond in this region of sub tropical plains of North India. It gives profuse flowering which complements the blue colour of the sky and gives a soothing summerish effect to the onlooker.

The tree is so packed with yellow flowers that it is difficult to spot a leaf. It is important to note that Amaltas do not give much required shade during harsh summers as during this time, the tree is overwhelmed with flowers with insignificant foliage to provide shade. It is planted along roads and avenue primarily for beautification. It has a Hybrid, Cassia alipurens that has cream coloured flowers.

Amaltas belongs to family Fabaceae and sub family Caesalpinioideae and is a fast growing medium sized perennial tree about 30-50 feet high with spreading branches and greenish grey bark. It is a deciduous tree which means it shed its leaves which reappear after the bloom is over towards the end of June. The leaves are compound, pari-pinnate, petiolate, three to five pairs of leaflets which are sub-sessile and opposite.

Things to remember while planting:

National tree and flower of Thailand

It is the state flower of Kerala and the national tree and flower of Thailand. The tree has strong and durable wood and is used to make furniture, supporting structures and agricultural implements. In Sanskrit it is called 'Aragvadha', meaning 'disease killer' and also has many medicinal benefits. However, self-medication is strongly to be avoided. It is advisable to keep children and pets at a distance.