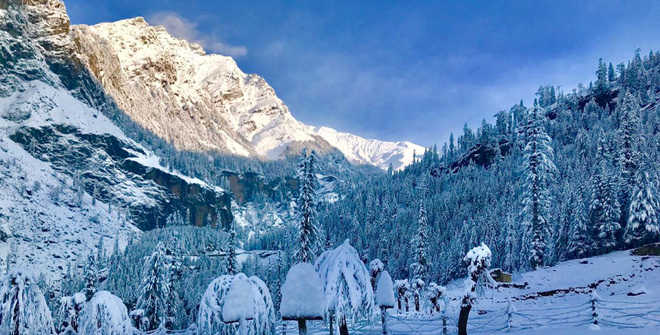 Kalpa, the picturesque tourist resort with the snow-laden Himalayas as its backdrop, recorded its warmest February in the past 28 years, a Met official said here on Monday, blaming the high temperatures to lack of precipitation.

Manmohan Singh, Director of the India Meteorological Department regional centre here, said the highest temperature of the town was 19 degrees Celsius on Sunday, which was 14 degrees above the average.

Before this, the highest maximum in Kalpa was 18 degrees Celsius on February 11, 1993.

However, on Monday, Kalpa, some 250 km from the state capital and is known for growing delicious apples, saw a high of 17.5 degrees Celsius, while the minimum stayed at 1.4 degrees, also four degrees above the average.

Currently, most of the towns in the state have been experiencing "warmer" days with temperature four to five degrees above the average, he said.

Likewise, the highest maximum temperature of the Queen of Hills, as Shimla was called by the British, was 20.1 degrees Celsius on Monday, whereas the minimum was 11.5 degrees. Both minimum and maximum were eight notches above the average.

The official blames lack of snow across the state for the abnormal high temperatures.

The state received 60 per cent deficit in snowfall till date. "This was due to absence of significant western disturbances in the state," he added.

The Met office has forecast snow and rain across the state on February 25 and 26. IANS