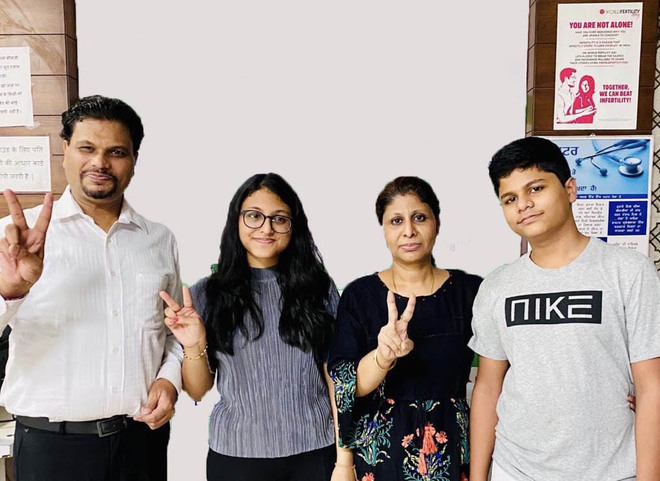 140 rank: An elated Ayushi Gupta with her family in Ludhiana.

City students came out with flying colours in NEET whose result was declared late last night.

Ayushi Gupta scored 140th rank in India. She is the daughter of doctor couple wants to take admission in AIIMS or any other premier institute in New Delhi.

“I have always seen my parents working till late night for the cause of patients. It was stethoscope that was my playmate during my childhood days. Seeing my parents, I always wanted to become a doctor and finally, I have achieved the first step for turning my dream into reality,” said Ayushi.

After doing her Class X from Sacred Heart Convent School, Sarabha Nagar, Ayushi opted to do her Class XII privately and stayed focussed on preparing for NEET.

“It was a conscious decision as I wanted full concentration on the exam. All my hobbies and interests were kept aside during these days. I stayed away from the social media all these years,” said Ayushi.

She studied for 14-15 hours in a day. We are happy that our daughter will be achieving what she always dreamt of,” said Dr Shiv Gupta and Dr Monika Gupta, parents of Ayushi.

Samridhi Manchanda, a student of BCM Arya Model Senior Secondary School, has scored 262nd all-India rank in NEET. Her father is a businessman, while her mother is a homemaker. Samridhi wants to become a cardiologist.

“When she was a child, she always had the dream of becoming a doctor,” said Teena Manchanda, her mother.

Samridhi used to study for 10-12 hours a day. “I was there in social media and used it whenever I wanted to relax a bit,” said Harshita.

Yajat Singla scored 515th rank in the country and aims to become an endocrinologist.