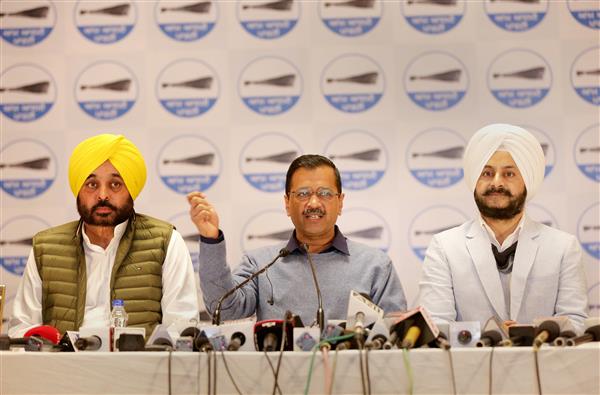 Aam Aadmi Party National Convener and Delhi Chief Minister Arvind Kejriwal on Tuesday termed the plight of government schools and teachers in Punjab as a misfortune.

Kejriwal gave eight guarantees to teachers for comprehensive education reforms in Punjab and promised that these guarantees would be implemented on priority if the AAP government is formed in 2022.

He also called upon all teachers to join the AAP's campaign to transform the state's government school education system like Delhi.

The eight guarantees include creating a Delhi-like environment in the education sector in Punjab, regularising outsourcing and contractual teachers, implementing a transparent transfer policy, banning non-teaching work by teachers and permanent recruitment on vacant posts.

Kejriwal along with AAP state president Bhagwant Mann was interacting with the media here. The party's Punjab in-charge Jarnail Singh and co in-charge Raghav Chadha were also present on the occasion.

Recognising the importance of education and teachers for the development and uplift of society, the Delhi Chief Minister gave the first guarantee to create a 'good environment for education' in the state.

Through the second guarantee, Kejriwal promised to secure all types of raw, outsourced and contract teachers. He said most of the teachers in Punjab have been working for only Rs 10,000 per month for the last 18 years, which is a joke and unjust for a teacher.

Appealing to his Punjab counterpart Charanjit Singh Channi, Kejriwal said the two demands of the protesting teachers -- to fill the vacancies and make the contractual teachers permanent -- should be immediately accepted. IANS