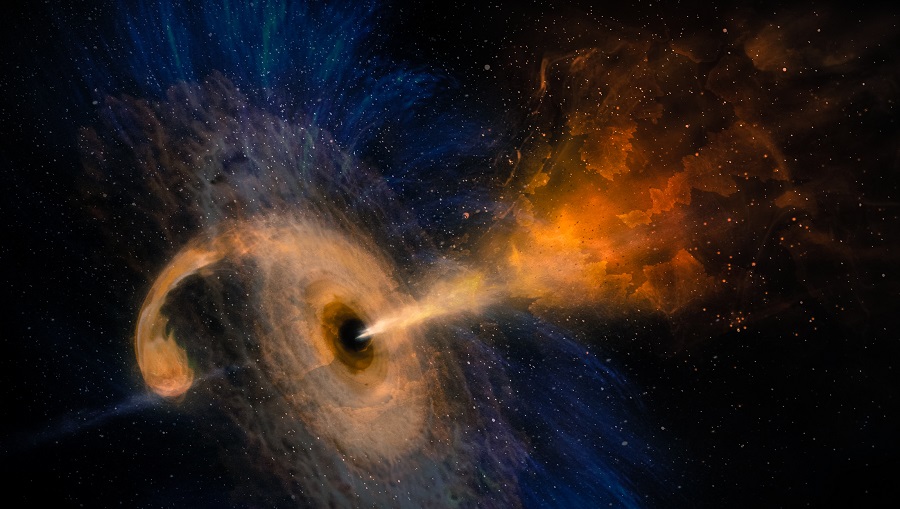 Indian astronomers have found an active galaxy in a very bright state with 10 times more X-ray emission than normal, equivalent to more than 10 trillion of the sun, and located five billion light years away that could help probe how particles behave under intense gravity and acceleration to the speed of light.

It could help study the role of strong gravity and acceleration of matter in the formation, interaction and evolution of galaxies in the early universe.

Every galaxy in the universe is believed to host a supermassive black hole at its centre. In some galaxies, the black hole is actively devouring a large amount of material and shooting a jet of plasma almost at the speed of light towards us. These are called blazars.

This class of sources emit in the whole electromagnetic spectrum, a rather uncommon phenomenon which requires extreme physical conditions. Hence, a study of such sources tells us about the behaviour of matter in an extreme gravitational field where it is difficult for light to escape from the vicinity of the black hole.

Astronomers at Aryabhatta Research Institute of Observational Sciences, an autonomous institute of the Department of Science and Technology, Government of India, have been monitoring one such black hole system named 'OJ 287' since 2015. This source shows a repeated optical brightness enhancement almost every 12 years.

In 2020, the source was very bright at optical and X-ray bands with X-ray flux more than 10 times the normal (non-active phase) flux. This flare was very different as it was not expected in models proposed for this source and thus, indicated a more complex system and physical conditions.

Investigating the extreme brightness shown by OJ 287 at optical and X-ray bands, astronomers led by Pankaj Kushwaha and Alok C. Gupta reported the source in a completely new spectral state.

The team argued that this change of state holds clues to the researcher's quest to understand how matter behaves in very strong gravity and how it accelerates the particle to almost the speed of light -- a feat that is out of the scope of even the most advanced CERN accelerator.

The research published in 'The Astrophysical Journal' tracked the details of changes in optical to the X-ray emission spectrum of the source with time from 2017 to 2020 -- after the second brightest X-ray flare of the source. It revealed how the source gradually started to change its spectral behaviour from mid-2018 to the new spectral state in 2020.