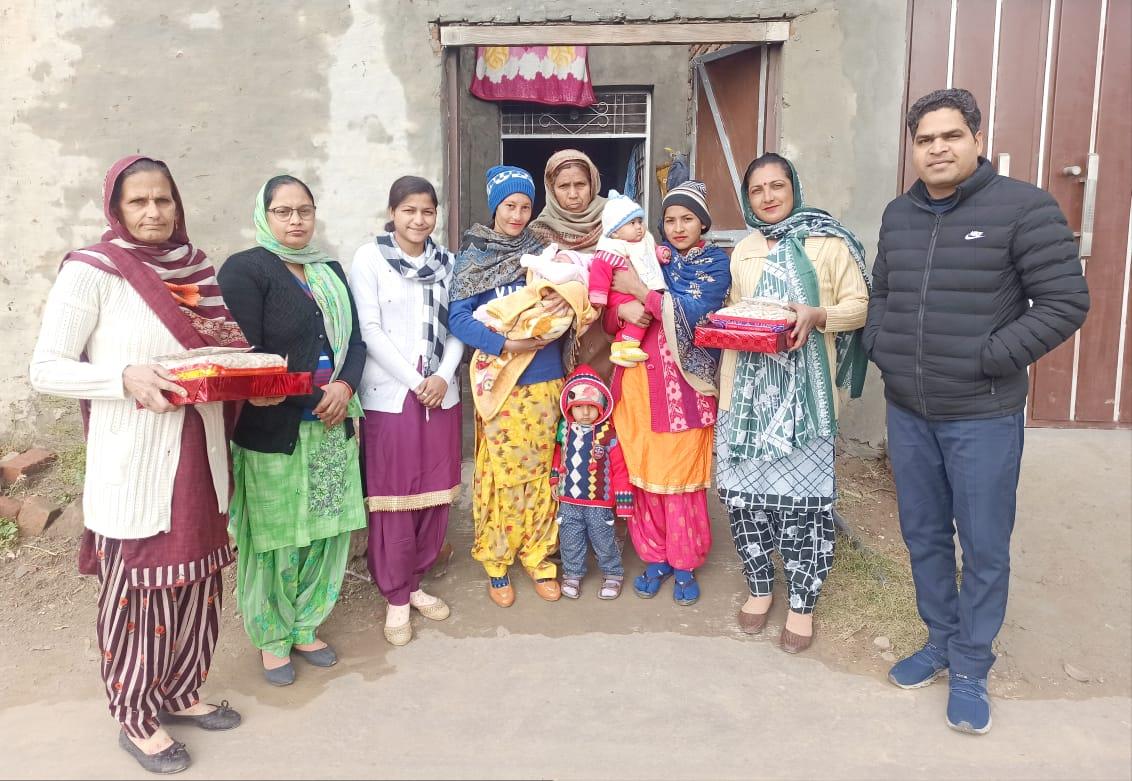 Ajmer Singh with the families of newborn girls in his village

A milk bottle, a rattle (called jhunjhuna in Punjabi and Hindi) and a teether are among the gifts that Ajmer Singh wraps carefully — one of the many he is going to distribute in various homes in his village where baby girls have been born this year. A similar package of goodies is also being wrapped at the Rurka Kalan village by school master Boota Ram to give away to his village's newborn girls.

In the 21st century when there are still homes where the birth of a baby girl is not celebrated, several school teachers are changing things, celebrating the birth of girls and opening the way for their emancipation. The celebration of the birth of little girls in their village through annual "Dhiyan Di Lohri" events is marking a change both in society and education. Incidentally, the change has been led by several free thinking men.

"Only until a few years ago, women at the Rurka Kalan used to dress only in suits, several homes grieved birth of baby girls and schooling girls was still a radical idea. Things have changed now. Girl in pants and t-shirts stroll happily in the evening. That's how much the village has changed. The football academy YFC and our school have both been instrumental in changing mindsets," says Boota Ram, teacher at the Government Girls Primary School for Girls, Rurka Kalan.

While a Lohri function to celebrate the birth of 21 baby girls was celebrated at Rurka Kalan on January 3, at Natthewal, Ajmer Singh, the teacher of the Government Primary School, Natthewal went door to door to five village families to greet them on the birth of their girls on Lohri. Both the schools celebrate Dhiyan Di Lohri with aplomb every year. The success of the events has spurred many other schools to take to the tradition.

Ajmer Singh says, "A few years ago we celebrated the birth of 10 to 12 girls. Last year it was seven to eight girls. This year it is five. Families know we will visit them. They look forward to it. Gifting mothers with moongfali, rewaris and gifts for the girls is an annual tradition. We have 53 students in the school, of whom 30 are girls. Previously some parents took out their girls from school after they reached 12 years of age. We began personally going and persuade them to educate them till 12th. Now the difference is evident. Most families are educating girls all through school. Acceptance of girls has increased. Gloom has turned into positivity."

Rurka Kalan resident Boota Ram began distributing rewaris in the village after his own girl was born in 2012, since 2013 onwards, he celebrating the birth of girls in his school too. In 2017, the school ushered in 51 girls in the block with Dhiyan Di Lohri !

This year, birth of 21 girls was celebrated. A last year the school also gave out Rs 5,000 cycles to five girl achievers from nearby schools. This time Boota Ram happily posed with mothers of new born girls.

The cultural event was itself a celebration of little boys and girls doing Bhangra and Giddha, dressed in traditional cultural attire. GPS, Girls Rurka Kalan has 275 students, 170 of whom are girls.

Incidentally both Boota Ram's daughter and his coleague teacher's own kids are students at the same school.

Boota says, "Asi tan kuriyan da shagun karna hi hunda. (We have to celebrate girls' birth). Be it 30, 40 or 50. Girls are gifted a package of - baby suit, blanket, school bag, groundnuts and rewaris. Their mothers are also honoured. Our girls also played in the state championship bagging bronze in Kho Kho and Football. We go to people's homes and welcome them for the event. It also sort of cements girls' future education with our goodwill. Many private students are quitting those schools and coming to our government school. They feel it is better."