Studying in a hut, son of daily wager to become first doctor in his R'sthan village 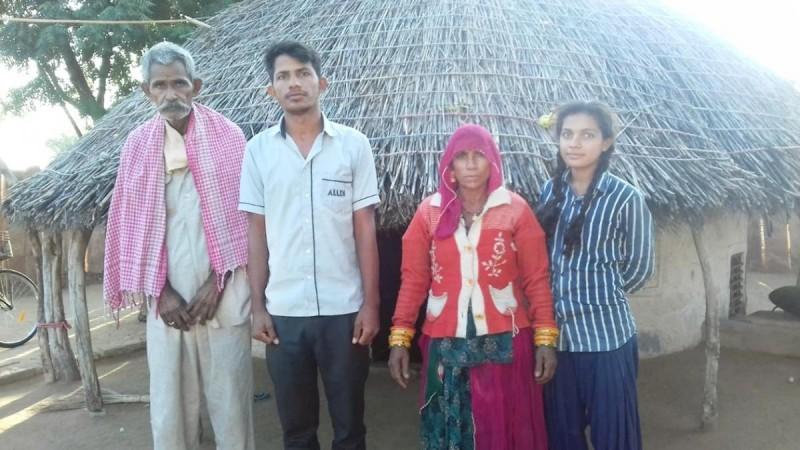 If you are committed and determined to do something, then no one can stop you from achieving success. One such story of unshakable determination is of Dudharam, a resident of Kamthai village of Sindhari tehsil in Barmer who achieved 626 marks out of 720 and will now become the first doctor in Kamthai Samdari village of Barmer.

Dudharam's father and brother work as labourers, his mother works under MNREGA. All he had was a hut to study in, but Dudharam dreamed of becoming a doctor and studied day and night to fulfil that dream. He did not let any difficulty come in the way of his dream. Today, all his hard work has paid off as Dudharam will be the first child of Kamthai village to do MBBS and become a doctor.

Despite the family's financial condition being weak, Dudharam did not deviate from his goal, did not let his self-confidence weaken, and achieved an All India Rank of 9375 by securing 626 marks out of 720 in the Medical Entrance Examination NEET (UG) 2021 in the fourth consecutive attempt.

Dudharam's family consists of five members, including parents and siblings. The family owns 10-12 bighas of land, but it being in a dry area, only one millet crop can be grown in a year, which can only feed the family. There is no other source of income. Dudharam's father Pooraram and younger brother Khemaram Kamtha work at construction sites. Sometimes mother Lehro Devi also goes to work under MNREGA. Younger brother Khemaram is doing his BA from Kota Open University along with working for wages, while younger sister Hario is studying in Class X.

Dudharam said that there are about 250 houses in Samdari tehsil, where electricity comes only for 5 to 6 hours. The village also faces a water shortage, so they have to bring water in a tanker from a tubewell 10 km away which they store near the house. Dudharam's parents are illiterate.

He passed the Class X from the village government school with 67.67 per cent marks and studied in the government school at Barmer till Class XII and secured 82 per cent marks. His school teacher Rajendra Singh Singhad inspired him to become a doctor. After this, he took admission in a coaching centre to prepare for NEET which gave him a 50 per cent concession in fee.

Dudharam said, "I was determined to become a doctor, and for me, nothing less than MBBS was acceptable. I made the first attempt in 2018, doing self-study and secured 440 marks. The second attempt was in 2019 again by self-study. That year, I got 558 marks. Then I decided to come to Kota to prepare for the third attempt and took admission in Allen Career Institute; then, I got All India Rank 23082 with 593 marks in NEET 2020. I could not get into a government college, but I took admission in BAMS at the Institute of Teaching and Research in Ayurveda, Jamnagar. I continued studying online at coaching with my BAMS.

"I worked hard and got All India Rank 9375 in 2021. I haven't thought about what to do next in PG or have decided about my career after MBBS. But one thing I am pretty sure, that after doing MBBS, I will make other students like me more aware about competitive exams. I will help them make better decisions and will help them flourish in their careers." IANS