The Lake of Skeletons — Roopkund Lake 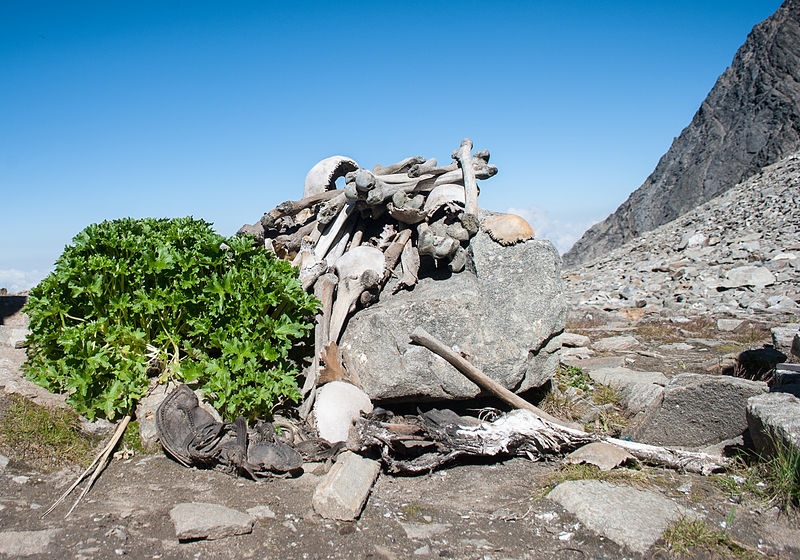 The year was 1942. The sun was just waking up in the Himalayas—its rays nudging the snow-clad mountains and the rock-strewn glaciers to life. The Roopkund Lake was gurgling. A forest guard was hard at work as he navigated the steep and hilly terrain, picking his way through the valley. Just as he reached the edge of the lake, he saw something that sent shivers down his spine.

He stood frozen, with his heart in his mouth. Hundreds of skulls and bones floated in the clear, turquoise waters of the Roopkund Lake, while some lay haphazardly on its shore—a striking contrast with the scenic beauty of the mountains. Something terrible must have happened here, but what? Who were these people? What were they doing in the inhospitable regions of the Himalayas? And how did their skeletons reach this lake that’s tucked away in the desolate mountains?

Ever since this discovery was made by the forest guard, the Roopkund Lake has been known by another name—the Skeleton Lake. In the brief summers that the Himalayas see between June and mid-October, the frozen lake melts—revealing its dark secrets. The remains have left  anthropologists, scientists, historians and the local people scratching their heads for long; no one knows who these people were or where they came from! The initial assumption was that these remains belonged to the Japanese soldiers who were trekking through the rough terrains of the Himalayas in a bid to invade India during World War II, and met a tragic fate. The British  government, which was ruling India at that time, was terrified and sent a team of investigators to determine the truth. The remains of roughly 300 people were removed from the lake, some of whose flesh and hair had been partly preserved by the dry, cold air of the Himalayas. However, upon examination, they realized that these bones were not of Japanese soldiers, for they were quite old and not ‘fresh enough’!

Roopkund Lake is a glacial lake, situated in the Himalayas, at an altitude of approximately 16,500 feet. Like many other Himalayan lakes, this one too has a mythological story attached to it. According to the myth, Lord Shiva and Goddess Parvati were on their way to Kailash. Goddess Parvati, before commencing on this journey, had killed demons. She wanted to have a bath but couldn’t find any rivers or lakes nearby. Lord Shiva then dug his trishul (trident) into the mountain and created a lake. Goddess Parvati bathed in the pristine blue waters of this lake. The waters were so clear that she could easily see her reflection in it. From there came the name ‘Roopkund’—‘roop’ meaning appearance and ‘kund’ meaning a small reservoir.

A CURSED KING OR A MASS SUICIDE?

Some scientists who studied the remains said that the bones date back to sometime between the 12th and the 15th centuries CE. Some believe that a group of people were trapped in the icy Himalayan slope and had no way to escape, and that’s how they all died together. These lonely victims could have been pilgrims headed to the Nanda Devi mountain, revered as the abode of Nanda, the Hindu Goddess of Bliss. Also known as Raj Jat, or Royal Pilgrimage, this gruelling trek is undertaken by local villagers every twelve years, along a path that crosses Roopkund Lake.

A legend goes that, in the medieval times, King Jasidhwal of Kannauj and his pregnant wife were taking this pilgrimage to celebrate the impending birth of their child. However, Jasidhwal disregarded the rules of the pilgrimage by taking dancers and soldiers with him and by refusing to walk barefoot. His wife also gave birth to the child along the way, on the slope of the mountain. This earned him the wrath of Goddess Nanda who sent a great snowstorm and the lives of the king, the queen and their courtiers were cut short by the raging mountain goddess. Over time, landslides pushed their bodies into the otherwise pristine Roopkund Lake. Remains of jewellery and other artefacts are still found scattered among the skeletons, apart from many knives and spears, which only point at this theory more strongly. Also, among Himalayan women, there is a traditional folk song, whose lyrics suggest that once a goddess was so infuriated with outsiders who tarnished the sanctity of her mountain abode that she showed her anger by hurling hailstones at them, which were ‘hard as iron’. These outsiders might have been the King of Kannauj and his troupe.

Some other theories propound that perhaps it was some sort of a ritual mass suicide. But why would so many people commit suicide together, and how? Well, no one knows for sure! 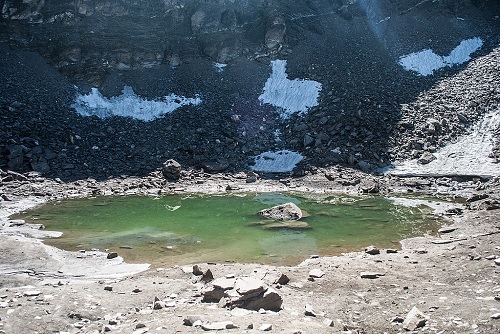 What was most intriguing about the skeletons found in the Roopkund Lake was that all of them bore strange blows on the skulls, as if hit by something the size of a cricket ball! But a concrete explanation to this had to wait for six decades after the forest guard found the skeletons in the lake. In 2004, an advanced scientific study was carried out, and the answer, eerily enough, was not too far from what the legend said. Some scientists studied the traces of round-shaped blows and cracks on the bones and found that the injuries to the skulls and shoulder bones of the skeletons were consistent with the victims being hit from above. These short, deep cracks didn’t seem to be caused by a landslide or an avalanche but by blunt, round objects. The only plausible explanation for so many people sustaining such similar injuries at the same time is that perhaps something fell from the sky. Scientists believe that the deaths of these people were caused by extremely large hailstones. Presumably, they were ‘iron-like’ hailstones, just as the folklore says.

In addition to skeletons, the scientists also discovered some bodies with remnants of the flesh intact. They could find their hair and nails as well as pieces of clothing. They also found glass bangles, indicating the presence of women, and leather shoes and bamboo staves, which led them to hypothesize that the corpses were those of pilgrims. The scientists estimate that as many as 600 bodies may still be buried in snow and ice by the lake!

TWO IS BETTER THAN ONE

During the study conducted on these skeletons in 2004, scientists collected samples of the bones as well as bits of preserved human tissue. They carried out DNA tests that revealed a rather shocking thing—the 300-odd skeletons belonged to two distinct groups of people, for there were evident differences in the bone features of their bodies.

Were these two groups related to each other? Scientists believe they were not. A few of these samples have unique DNA, which is not found anywhere in the world but only in a particular group of people from Maharashtra, while a few of them have DNA that has characteristics of the hill people of the Himalayas.

Many anthropologists believe that since Roopkund is almost 35 kilometres away from the nearest human settlement and it would have been impossible for the pilgrims to venture into the area on their own, they employed local people as porters.

The plausible scenario of what could have happened is that the taller group—with people who were related to each other (a large family or a tribe)—probably wanted to make a pilgrimage through the mountain and they hired some local people as guides. Perhaps the two groups met at the foot of the mountain and walked uphill when suddenly, enormous cricket ball-sized hailstones rained down and hit these people on their heads and caused them to die.

A study published in 2019 by a team of Indian and international scientists also suggests that the remains belong not just to Indians but also to people who hailed from Southeast Asia and faraway Greece. The scientists say that they did not die in a single catastrophic event but because of multiple incidents occurring over a thousand years. But they’re still not sure what brought these people to Roopkund or how exactly they died!

Some people also believe that the skeletons belong to groups of people who came to the valley in search of magical mushrooms, or ‘keeda jadi’ in the local language.

It’s said that every spring, the valley sprouts thousands of these caterpillar fungi, which contain unbelievable medicinal properties. The fungus is highly valuable.

Maybe some people headed out in search of them in the springtime and found themselves in the midst of a most devastating natural disaster. The journey could have progressed well until the point everyone was trapped, with no place to run and hide as disaster struck and a violent torrent of hailstones falling from the skies battered the whole group.

Could this be true? Well, your guess is as good as ours!

THE MYSTERY OF THE SKELETON LAKE

Over the years, the Skeleton Lake mystery has teased many historians, anthropologists and archaeologists who have been doggedly looking for answers the world is waiting for: What really happened in Roopkund?

Who do these skeletons belong to? What combination of factors led to the death of these people? Why are the wounds on all skeletons only on the heads and the shoulders?

The mysteries surrounding the Roopkund are many but, we guess, the lake is not going to give out its secrets too easily! Whatever may be the case, you should try and visit this mystery lake at least once. Who knows?—maybe you will be the next one to find something strange about this place!