The man with the 'Golden Arm' visits Elpro International School 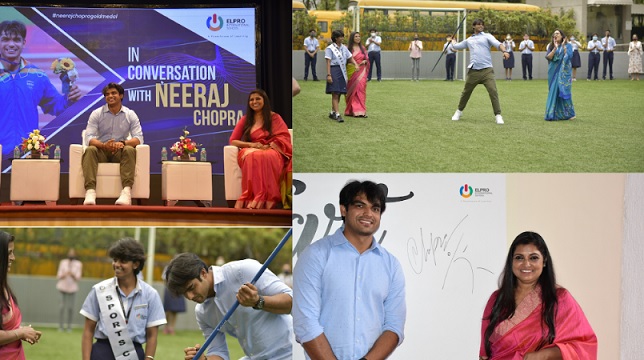 Elpro International School, Chinchwad, was abuzz with excitement on October 10, 2021 due to the presence of the man with the golden arm. Neeraj Chopra, India’s first track and field Olympic Gold medalist was hosted by EIS.

Director-Principal, Dr. Amrita Vohra felicitated the young champion and welcomed him to EIS. Students’ excitement reached its peak as Neeraj walked in, warmly greeting everyone. In an interactive event titled “In Conversation with Neeraj Chopra”, he shared his experiences from his golden moment, along with words of wisdom and hardships with students. In his addressal, he emphasized on the importance of balancing academics and encouraged students not only to excel in sports, but to always follow the chosen path with action and determination.

“Patience and Discipline are the two most important virtues for success,” he said. He further added, “One should always listen to their heart’s calling and it is important to follow it. Parents should also extend support to their children and allow them to pursue their choice of sport.”

In between moments of fun and enthusiasm, Neeraj was ushered into the Sports Arena of EIS. As everyone cheered around him, he gladly took a javelin, a spear, and demonstrated an incredible throw, much to the delight of the students. He also took a moment to autograph the javelin and present it to the Sports Captain of Elpro International School, Shrishti Singh who herself is a National level Javelin thrower.

Dr. Amrita Vohra, Director Principal of Elpro International School said, “A heartfelt interaction with Neeraj has not only inspired all students but has also given them unmatched happiness. EIS hopes that Neeraj Chopra’s historic Olympic win would set the path towards glory for future generations to come.” TNS