China has been naming geographical entities on the Moon since 2010 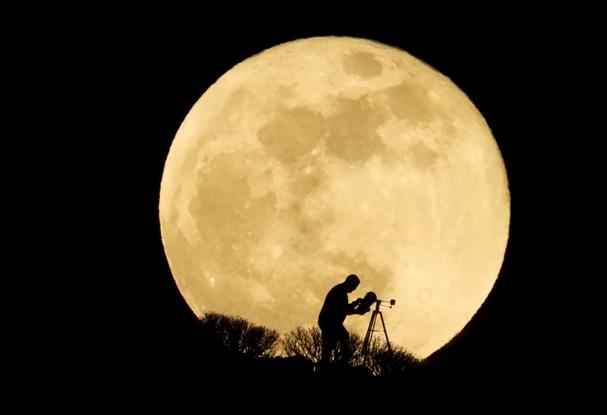 A man uses a telescope to observe the full moon, known as the ‘Super Flower Moon’ as it rises over Arguineguin, in the south of Gran Canaria, Spain. Reuters

The International Astronomical Union (IAU) has approved eight Chinese names for features around the area on the Moon where China’s spacecraft Chang’e-5 probe landed last year to collect samples from the lunar surface and return to Earth.

The Chang’e-5 space mission is China’s maiden attempt to retrieve materials from an extra-terrestrial body. It was launched on November 24 last year.

It was the first attempt to bring the lunar samples in over 40 years after the US sent astronauts to the Moon to collect samples.

“The IAU Working Group for Planetary System Nomenclature has approved eight names for features on the Moon in the vicinity of the Chang’e-5 landing site: Mons Hua, Mons Heng, Pei Xiu, Shen Kuo, Liu Hui, Song Yingxing, Statio Tianchuan, and Xu Guanqui. For more information, please see the LAC-23 map in the Gazetteer of Planetary Nomenclature,” the IAU said in a press statement issued on May 24.

China has been naming geographical entities on the Moon since 2010.

In September 2010, China’s Ministry of Civil Affairs published the official Chinese names for places on the Earth’s moon, in a first that eliminates confusion and will help the nation’s lunar exploration efforts, according to the official media here.

The ministry published the Chinese names for 468 places.

Later, state-run China Daily reported that in February, 2019 five more geographical entities on the moon have been given Chinese names, based on discoveries from China’s latest Chang’e- 4 mission.

The China National Space Administration, Chinese Academy of Sciences and the IAU named the landing site of the Chang’e-4 probe as Statio Tianhe, and three annular pits around the landing site are called Zhinyu, Hegu and Tianjin. The central peak in the Von Karman Crater is referred to as Mons Tai, the statement added.

Tianhe, another name for the galaxy in ancient China, implies that the Chang’e 4 probe served as a pioneer in the history of human lunar exploration.

According to the IAU naming rules, the landing site name has the prefix of Statio in Latin.

And so far only two places have such a prefix, the first being the landing site of Apollo 11, Statio Tranquillitatis, the China Daily’s report said.

Mount Tai is one of the five most famous mountains in China in East China’s Shandong province.

Naming entities on lunar surfaces started in the 17th century in Europe and in the 20th century the United States and the former Soviet Union had the most names due to their lunar explorations, the report said. PTI

2 killed in road accidents in Amritsar