Scientists think they are caused by the merger of two neutron stars, extremely dense objects about the mass of the Sun compressed into the volume of a small city 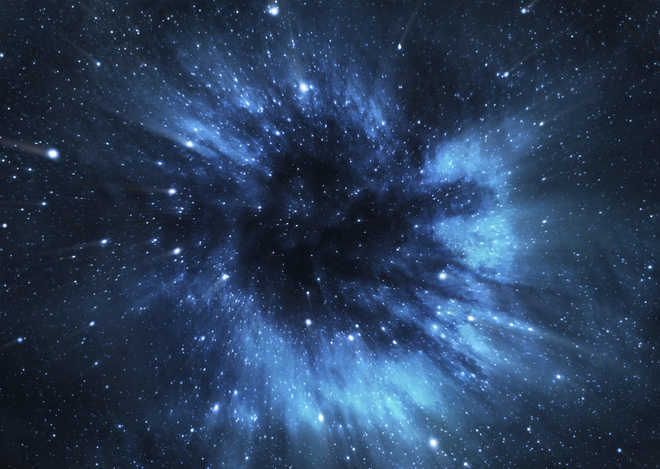 Astronomers have discovered the brightest infrared light from a short gamma-ray burst ever seen, with a bizarre glow that is much brighter than previously thought was possible.

It's half-second flash of light, detected in May of this year, came from a violent explosion of gamma rays billions of light-years away that unleashed more energy in a blink of an eye than the Sun will produce over its entire 10-billion-year lifetime, according to a study accepted for publication in an upcoming issue of The Astrophysical Journal.

"It's amazing to me that after 10 years of studying the same type of phenomenon, we can discover unprecedented behaviour like this," said lead author of the study Wen-fai Fong, Assistant Professor at Northwestern University in the US.

"It just reveals the diversity of explosions that the universe is capable of producing, which is very exciting." NASA's Hubble Space Telescope quickly captured the glow within just three days after the burst and determined its near-infrared emission was 10 times brighter than predicted, defying conventional models.

"These observations do not fit traditional explanations for short gamma-ray bursts," said Fong.

"Given what we know about the radio and X-rays from this blast, it just doesn't match up. The near-infrared emission that we're finding with Hubble is way too bright." To zero in on this new phenomenon's exact brightness, the team used W. M. Keck Observatory on Maunakea in Hawaii to pinpoint the precise distance of its host galaxy.

"Distances are important in calculating the burst's true brightness as opposed to its apparent brightness as seen from Earth," said Fong.

"With Keck, we were able to determine the true brightness of the burst and thus the energy scale. We found it was to be much more energetic than we originally thought." Lasting less than two seconds, short gamma-ray bursts are among the most energetic, explosive events known; they live fast and die hard.

Scientists think they are caused by the merger of two neutron stars, extremely dense objects about the mass of the Sun compressed into the volume of a small city.

Once the alert went out, the team quickly enlisted other telescopes to conduct multi-wavelength observations.

They analysed the afterglow in X-ray with Swift Observatory, optical and near-infrared with Las Cumbres Observatory Global Telescope network, Hubble, and Keck Observatory, and in radio wavelengths with the Very Large Array radio observatory. IANS