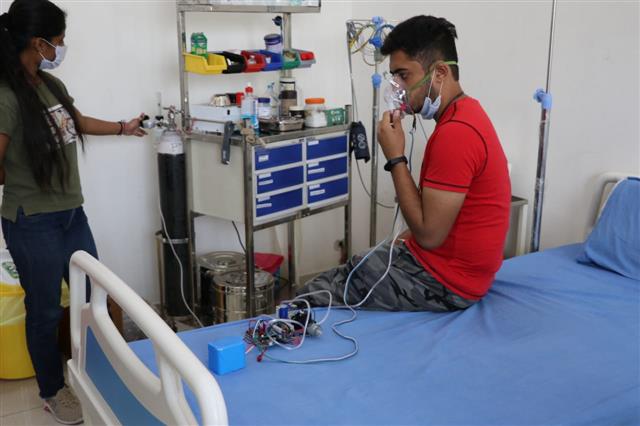 "AMLEX” will increase the life of an oxygen cylinder by three times. — Tribune Photo

Indian Institute of Technology (IIT Ropar) scientists have claimed to develop the country’s first of its kind oxygen rationing device "AMLEX” which will increase the life of an oxygen cylinder by three times.

IIT Ropar’s assistant professor Dr Ashish Sahani—who led the team that developed the device comprising PhD students of Biomedical Engineering Department Mohit Kumar, Ravinder Kumar and Amanpreet Chander—said that the new device would not only help in coming over situations similar to the second wave of Covid-19 when patients had a tough time in hospitals due to shortage of oxygen, it would also save a lot of money for patients as well as hospitals.

Further, with the second wave, the demand gone up more than seven times—5,000 tonnes per day against the pre-Covid 19 level of 700 TPD, he added.

• Will increase the life of the oxygen cylinder by three times.

• It utilizes a sensor that senses and successfully detects inhalation and exhalation of the user in any environmental condition.

• The inhalation and exhalation process are sensed using a sensor via the contactless method.

• Works with any commercially available oxygen therapy masks with multiple openings for airflow.

• The device can operate on both portable power supply (battery) as well as line supply (220V-50Hz).

So far, during exhalation, the oxygen in the oxygen cylinder/pipe is pushed out along with the exhaled CO2 by the user.

This leads to the wastage of a large volume of oxygen in the long run.

In addition to this, a large volume of oxygen escapes from the openings of the mask to the environment in the resting period (Between inhalation and exhalation) due to the continuous flow of oxygen in the mask, he added.

"AMLEX", on the other hand, was a system developed specifically for oxygen cylinders synchronising the flow of oxygen with inhalation and exhalation of the patient, thus conserving a large amount of oxygen in the reservoir for a long-lasting operation.

As “AMLEX” supplies a required volume of oxygen to the patient during inhalation and trips when the patient exhales CO2, it saves the flow of oxygen at that time, said Dr Sahani.

The innovators of "AMLEX" claimed that the patient’s experience was relaxing and non-suffocating, as the device was fully able to work with commercially available oxygen masks with multiple openings to the environment.