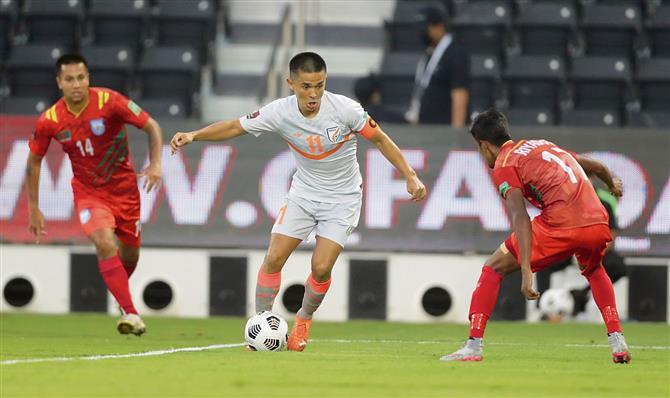 The list of people who are in awe of veteran striker Sunil Chhetri’s skills keeps growing. After the 36-year-old powered India to their first win in the joint 2022 FIFA World Cup and 2023 Asian Cup qualifying tournament with a brace against Bangladesh, India coach Igor Stimac could not hide his admiration for the team captain.

“Many people keep on asking as to when Sunil is going to retire. He works so hard on the pitch, and in every training session, he is by far the best,” Stimac said after the match. “He is in such good shape and is working with such professionalism. He is working as if he is 25, playing as if he is 25, and scoring goals like he is 25,” he added.

Chhetri scored two goals in the span of 13 minutes to help India seal their first win in a World Cup qualifier away from home since 2001.

Chhetri leads Barcelona superstar Messi by two goals and sits a place above UAE’s Ali Mabkhout, who is third on the list with 73 strikes to his name.

Centre-back Sandesh Jhingan felt that Chhetri’s name will be remembered even after 100 years.

“Some 100 or 200 years down the line, people will still talk about Sunil Chhetri. As long as there is Indian football, people will remember his name,” Jhingan said. “It’s for everyone to see what he does on the field. I would rather like to mention that off the field he is the perfect example for all to follow,” he added.

Goalkeeper Gurpreet Singh Sandhu said, “I will keep on mentioning that there’s one guy floating in between Cristiano Ronaldo and Lionel Messi — and that’s my teammate, my captain Sunil Chhetri. It shows his commitment and how consistent he has been at scoring goals. It’s simply remarkable.” — PTI

I do not count the number of goals. Ten years later, we will sit together, have a chat and then count.