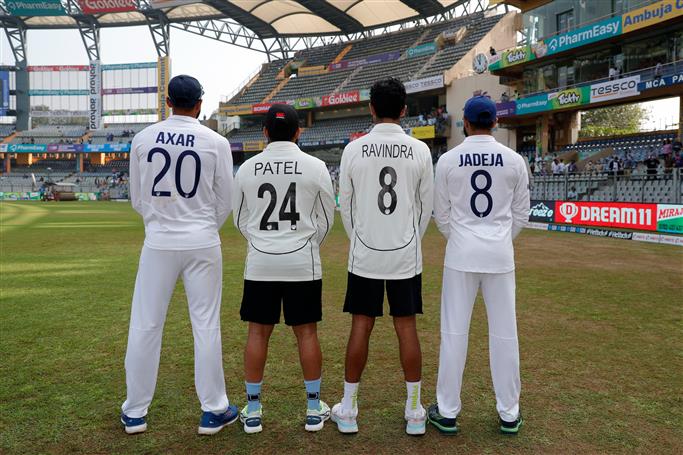 The Board of Control for Cricket in India has tweeted a heartwarming picture of Indian spinners Axar Patel and Ravindra Jadeja and New Zealand spinners Ajaz Patel and Rachin Ravindra standing in sync..

All four tweakers – Axar Patel, Ajaz Patel, Rachin Ravindra and Ajay Jadeja (in that order) - are standing with their backs to the camera so that the names on their jerseys read: Axar Patel Ravindra Jadeja.

The picture showing the bonhomie between the teams was posted sometime after India thrashed the Kiwis with a huge margin in the second Test at the Wankhede Stadium in Mumbai on Monday.

How's that for a quartet! 🇮🇳 🇳🇿#INDvNZ #TeamIndia @Paytm pic.twitter.com/eKqDIIlx7m

The Mumbai-born Ajaz and Indian-origin player Rachin Ravindra, who has been named after Rahul Dravid and Sachin Tendulkar, had a good showing in the series with Ajaz catching up with the 10-wickets-in-a-Test-innings record of Englishman Jim Laker and Anil Kumble.

The picture captioned ‘In sync! How is that for a quartet!’ has gone viral on social media and received a host of comments.