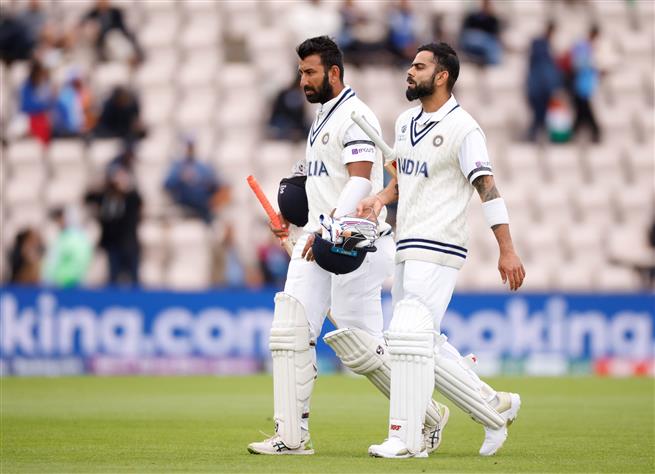 Bad light stopped play in the final session of day two with India reaching 134/3 against New Zealand in the World Test Championship final here on Saturday.

Skipper Virat Kohli was unbeaten on 40 while Ajinkya Rahane was bating on 22 in a 46-run unbroken stand for the fourth wicket. While early tea was taken, the post-tea session started 15 minutes late due to bad light.

Skipper Virat Kohli was patience personified as he battled hard in seaming conditions to take India to 120 for 3 at tea on the second day of the World Test Championship final against New Zealand here on Saturday.

The only dismissal during the second session was Cheteshwar Pujara (8 off 54 balls), who was trapped leg before by an inswinger from Trent Boult (1/29 in 11 overs).

Kohli went into tea at 35 off 94 balls, having added only 51 runs to the team’s total during the session. He had an engrossing battle with New Zealand’s military medium bowler Colin de Grandhomme, who would probe him on the off-stump channel.

The overcast conditions weren’t conducive for stroke-play as Kohli had his deputy Ajinkya Rahane (13 batting) for company during their 32-run unbroken stand.

In the first session, Rohit Sharma (34 off 68 balls) and Shubman Gill (28 off 64 balls) batted really well blunting the swing with a pronounced front-foot movement to add 62, before Kyle Jamieson (1/14 in 12 overs) and Neil Wagner (1/19 in 9 overs) got both of them in quick succession.