Blind cricket in a dark place

With Rs 700 match fee, Rs 11,000 for national title, passion the only thing keeping them going 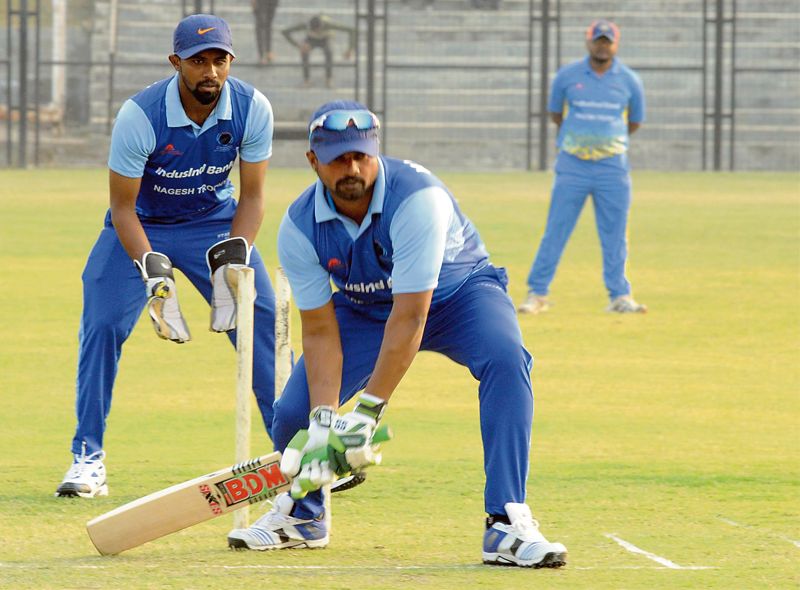 If the DCCI is fromally recognised, it may make a world of difference to the fortunes of blind cricketers. S Chandan

The Andhra players are ecstatic. They have just beaten a strong Karnataka team to win the Nagesh Trophy National T20 Tournament for the Blind for the third successive time.

The win brought a purse of Rs 1.2 lakh for the champions while runners-up Karnataka were awarded Rs 80,000. No sooner did the dust settle after the celebrations and trophy presentation than the harsh reality of life that dogs these players every day came back. The blind cricketers — 28 teams participated in this year’s tournament — only get Rs 700 as match fee. The winners and runners-up will share the financial ‘rewards’ with all team members, which roughly works out to Rs 5,000 per player for the Karnataka team and Rs 7,500 per player for Andhra Pradesh’s players. Add Rs 3,500 for playing five matches, including the final, and the cricketers — most of them partially or completely blind — are only taking home only 8,500 to Rs 11,000, depending upon the team’s placement.

Where is the money?

While the tournament had several sponsors, including IndusInd Bank and ONGC, who have been supporting the cause of blind cricketers, very little is showing up in the bank accounts of these bravehearts. What is shocking is that both sides were stacked with India internationals, who had been instrumental in India winning the Blind World Cup four times in a row.

Prakash Jayaramaih, 40 years old, was the vice-captain of the Indian Blind team and played a big part in India’s wins in two International World Cups and two T20 World Cups. His day job is that of an accountant in Ramnagar district of Karnataka. His family, including his parents, wife and children, depends on his meagre monthly income of Rs 12,000.

“I do not know the number of times I have approached our state government for employment. All we get is assurances but nothing has happened,” Prakash, who has only 30 per cent visibility in his eyes, said of his struggles.

“My father, who was a lorry driver, has been bedridden for eight years after an accident. My mother, wife and children are all dependant on me. Only I know how I have struggled money-wise,” he added.

Standing next to him is Sunil Ramesh Kumar, another of India’s World Cup stars. Sunil, who lost his eyesight when he suffered an injury while playing cricket, has a similar story to narrate. Son of farm labourers Ramesh and Vanaja, the BA (History) graduate is still dependent on his father’s earnings, though he feels he should be the one taking care of his family.

“It has been hard. I have been playing cricket since 2014 and was part of the Indian team from 2016. Apart from the small match fee that we get, there is hardly any way I can support my parents,” Suresh said. “The sponsors help us a lot in terms of kit and other needs but I still need to contribute in terms of income. Unfortunately, I haven’t been able to get a job.”

The tournament saw 28 teams and over 400 cricketers and support staff taking part in this annual affair. Sixty matches were played over six venues in and around the National Capital Region. The Cricket Association of Blind in India (CABI) spent over Rs 1 crore in hosting the tournament, according to its treasurer, Chandrasekhar KN. However, the show-stoppers — the cricketers — are not on the money wagon.

Andhra Pradesh captain A Ravi said passion for the game is what drives the majority of the blind cricketers. His father is a tailor and Ravi is still getting pocket money from him. “I am still searching for a job. We will get something like Rs 7,500 and some match fee here. It is not enough for sustenance. I think we are still doing it because we are still committed and passionate for this game,” he said.

There are chances that the lives of at least a few may improve as the Board of Cricket Control of India (BCCI) has signalled it might support the Differently-Abled Cricket Council of India (DCCI), an umbrella body of differently-abled cricket associations. The DCCI may be formally recognised during the BCCI AGM in December. Once that happens, Ravi, Prakash and his fellow strugglers will get a proper calendar of domestic and international matches. The match fee will see a big hike. Above all, international and national-level cricketers will be able to claim pension, much like former India and First-Class cricketers.

“BCCI secretary Jay Shah has promised to help the DCCI and he has assured us of all help. This is only a start of good things for our players,” DCCI secretary general Ravi Chauhan said.

Until that time, Ravi and his friends will have to go about their business running on passion alone.