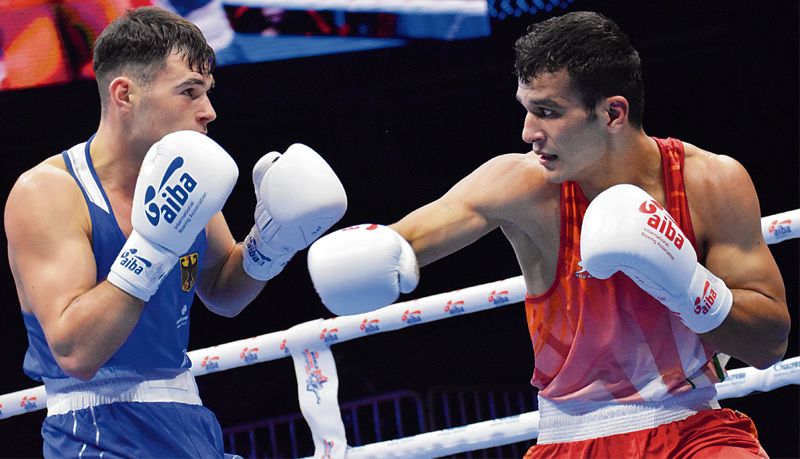 India’s Nishant Dev (71kg) and Sanjeet (92kg) made the quarterfinals following impressive victories but two others bowed out of the AIBA World Championships after losing their last-16 stage bouts here today.

Nishant defeated Mexico’s Marco Alvarez Verde 3-2 in a late night bout on Sunday to set up a clash with Russia’s Vadim Musaev. Sanjeet, a quarterfinalist in the previous edition, got the better of Georgia’s Giorgi Tchigladze 4-1 to enter the last-8 stage for a second successive time. He will face Italy’s Aziz Abbes Mouhiidine.

However, Rohit Mor (57kg) went down to Kazakhstan’s Serik Temirzhanov 4-1.

Akash Sangwan (67kg) too lost 0-5 to Cuba’s former world youth champion Kevin Brown Bazain in a fight that left both the boxers with bloodied faces.

Mor gave a good account of himself by fighting hard and taking his chances against the technically sound Kazakh, who was especially terrific in the opening round with his attacks.

Sangwan was equally gritty but lacked in footwork and was perhaps a bit too worked up during the contest. Brown, despite being caught off guard more than once by Sangwan’s persistent attacks, was the sauperior of the two boxers in terms of making counterattacks.

The Cuban also displayed a strikingly good defence and was a clear winner.

Also exiting was Sumit Kundu (75kg), who fought valiantly against another Cuban Yoenlis Hernandez but lost 5-0 and Deepak Bohria (51kg), who was beaten by Kazakhstan’s Saken Bibossinov. — PTI