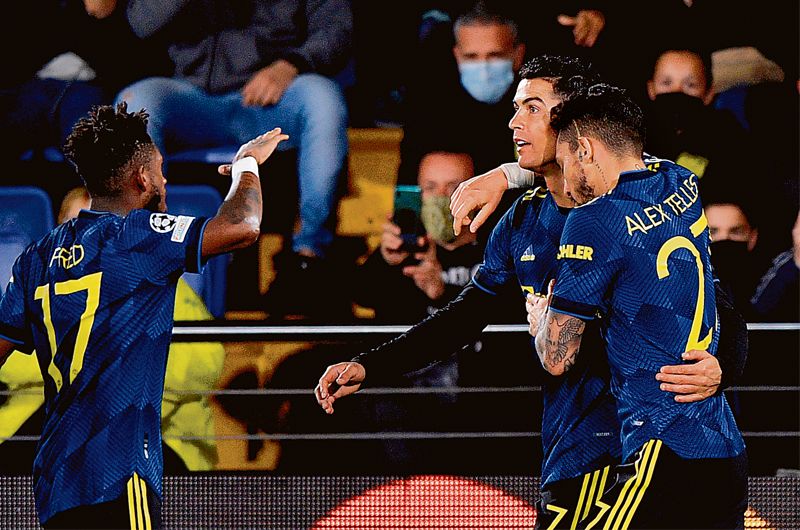 A smart piece of improvisation by Cristiano Ronaldo helped send Manchester United into the last-16 of the Champions League as Michael Carrick’s spell as the English club’s interim manager began with a 2-0 win at Villarreal.

Scoring his fifth goal of this group stage and 140th overall in the competition, Ronaldo adjusted his feet and lobbed the goalkeeper with a first-time effort in the 78th minute after Fred won the ball back high up the field.

Jadon Sancho then scored his first goal, firing in off the underside of the crossbar in the 90th minute at the end of a sweeping counterattack that used to be a feature of the team under Ole Gunnar Solskjaer. United moved onto 10 points, three more than Villarreal, and were guaranteed of advancing as the winner of Group F thanks to Atalanta drawing 3-3 at Young Boys later Tuesday.

Barcelona: After failing to get the job done at home against Benfica, Barcelona know they will likely need a win at unbeaten Bayern Munich to avoid their first group-stage elimination in nearly two decades.

Barcelona’s hopes of advancing took a hit after a 0-0 draw with Benfica on Tuesday at the Camp Nou Stadium.

A win would have guaranteed Barcelona a spot in the knockout stages for the 18th straight season, but they couldn’t capitalise on their chances.

London: Inflicting the heaviest defeat on Juventus and reaching the knockout stage was satisfying enough for Chelsea. Having three academy graduates supply goals made it a perfect night.

Trevoh Chalobah, Reece James and Callum Hudson-Odoi — all under 23 — found the net before the hour mark in a 4-0 victory. “The crowd loves it,” Chelsea manager Thomas Tuchel said. — AP