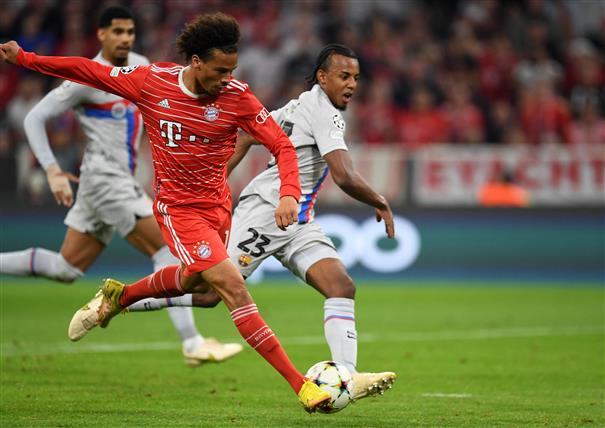 It doesn't seem to matter which shirt Robert Lewandowski is wearing — Bayern Munich just keep getting the better of Barcelona either way.

Bayern extended their recent dominance over the Spanish giants with a 2-0 win in the Champions League to show they can cope quite well without Lewandowski, who left to join Barcelona in the off-season.

It started out as a friendly homecoming as Lewandowski walked down the familiar steps of the Allianz Arena players' tunnel before kick-off, hugging every one of his former teammates along the way.

Bayern's players didn't extend the same level of hospitality once the game started.

After Lewandowski missed several good chances to score in the first half, Lucas Hernandez and Leroy Sane scored within a five-minute span in the second as Bayern took control of Group C with two wins in two games.

Sporting Lisbon also moved to six points in Group D after netting two late goals to beat Tottenham 2-0 at home. The other group game between Marseille and Eintracht Frankfurt was marred by fan disturbances before kick-off, forcing riot police to intervene when opposing supporters launched flares and fireworks at each other. Frankfurt won the game 1-0 thanks to a first-half goal from Jesper Lindstrom.

Liverpool needed an 89th-minute goal to get their first win of the European campaign. Joel Matip headed home a corner to give last year's runners-up a 2-1 home win over Ajax. — AP