For CSK, Shardul Thakur took three wickets while Ravindra Jadeja and Josh Hazlewood got two each 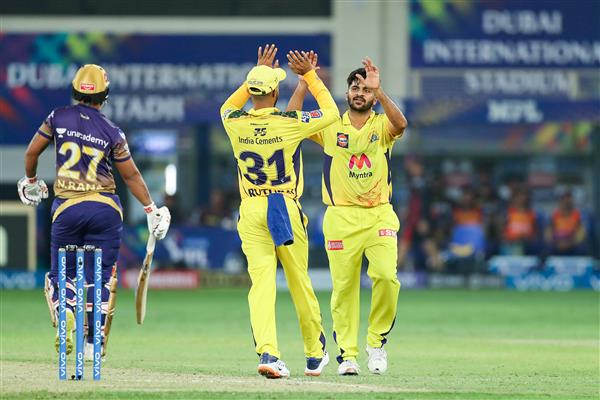 The in-form Faf du Plessis hit a magnificent 86 off 59 balls, laced with seven fours and three sixes, to help CSK post 192 for 3 after they were invited to bat.

Chasing an imposing target of 193, KKR could manage 165 for 9 in their 20 overs with Shubman Gill and Venkatesh Iyer hitting 51 and 50 respectively.

For CSK, Shardul Thakur took three wickets while Ravindra Jadeja and Josh Hazlewood got two each.

Earlier, the highlight of the CSK innings was the three half century partnerships that du Plessis shared.

He first put up 61 runs with his opening partner Ruturaj Gaikwad (32) and that was followed by a 63-run stand with Robin Uthappa (31 off 15 balls) for the second wicket.

Moeen Ali then made a late flourish with a stroke-filled 37 not out off 20 balls, laced with two fours and three sixes as he stitched a 68-run stand with du Plessis.

CSK added 112 runs in the back end of their innings after they were 80 for one at the halfway mark.