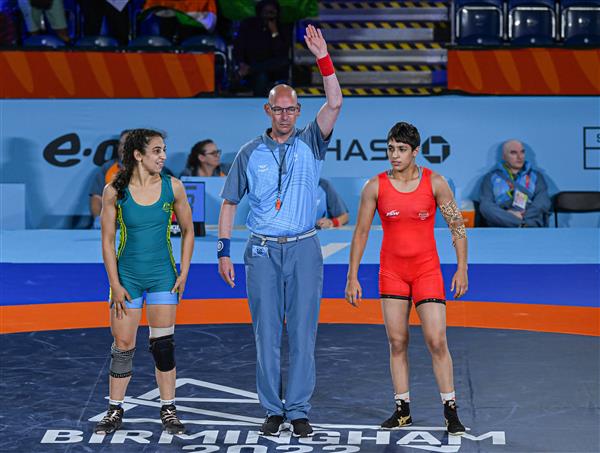 Indian wrestler Anshu Malik after winning her match against Symeonic of Australia during the Women’s Freestyle 57 kg Wrestling event at the Commonwealth Games 2022 in Birmingham, UK, on August 5, 2022. — PTI

Indian wrestler Anshu Malik started her Commonwealth Games 2022 campaign with a win as she defeated Irene Symeonidis of Australia in her Women's Freestyle 57 kg category match to enter the semi-finals on Friday.

Malik was in her dominant form in this match which lasted for one minute and four seconds. She crushed her Australian opponent as she took a 6-0 lead by pinning and rolling the Australian out of the ring.

Technical skill-wise, Malik was just too good for Symeonidis and this factor helped her win.

Later, Sakshi Malik defeated Kelsey Barnes of England by 10-0 via technical skill-wise in the Women's Freestyle 62 kg to enter the semi-finals. While Indian grappler Divya Kakran suffered a defeat against Blessing Oborududu of Nigeria by 0-11.

Earlier in the day, star Indian wrestler and Olympic medalist Bajrang Punia entered the quarterfinal of the men's 65 kg category after defeating Lowe Bingham of Nauru in his campaign opener at the ongoing Commonwealth Games 2022 in Birmingham on Friday.

Punia was extremely dominant in his match and scored a 5-0 win in a bout that lasted for one minute and 47 seconds. He scored the win via fall.

In the quarterfinal, Punia will take on Jean Guyliane Joris Bandou of Mauritius later today.

Indian wrestling contingent has started its campaign at Commonwealth Games 2022 from today.

Commonwealth Games 2022 started in Birmingham on July 28 and will go on till August 8.