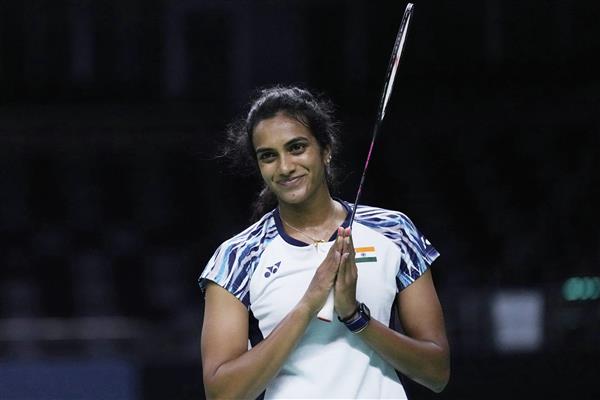 Ace Indian shuttler PV Sindhu sailed into the pre-quarterfinals of the women's singles event with a comfortable straight game win over Maldives' Fathimath Nabaaha Abdul Razzaq at the Commonwealth Games here on Thursday.

It was always going to be a tough task for Fathimath against the two-time Olympic medallist, who pocketed the Round of 32 match 21-4 21-11 in just 21 minutes.

Sindhu, the last edition's silver medallist in the singles, hardly broke a sweat while toying with her opponent in the first game.

Without adopting an aggressive approach, Sindhu outfoxed the Maldives’ shuttler with her all-round game. She mostly used her deceptive drop shots to garner points.

In the second game, Fathimath produced some resistance initially and was on level terms with Sindhu till 9-9, as Sindhu mostly gave away points on unforced errors.

But she got her composure back and went into the breather leading 11-9.

After the break, it was all Sindhu as she ran away with the game with Razzaq managing just two points, to book her place in the last-16.