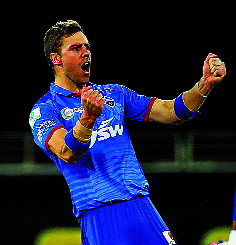 Opener Shikhar Dhawan says his teammates in Delhi Capitals know it will be a job well done whenever the ball is handed to the lethal pace duo of Kagiso Rabada and Anrich Nortje.

Nortje (2/33) was breathtakingly fast, bowling in the mid-150kmph. He gave away just four runs and took a wicket in the 18th over. Rabada (1/28) followed that up with a three-run over with a wicket.

“Nortje and Rabada are great bowlers. Rabada is a legend, and when they both bowl as a partnership, it is lethal,” Dhawan, who took over the captaincy duties from an injured Shreyas Iyer, said at the post-match press conference.

Kagiso Rabada (18 wickets) holds the Purple Cap. Nortje set the IPL ablaze by bowling the fastest delivery in the tournament’s history. The 26-year-old clocked 156.2 kmph, bettering compatriot Dale Steyn’s (154.4 kmph) record. “They have been taking early wickets and when we bring them back during the death overs or the middle overs, we know they will do the job. We are fortunate to have this class of bowling. The spinners have also been doing their job. The way (Ravichandran) Ashwin has been performing after the injury has been great. Everyone is performing and that is a sign of a good team,” he added.

Deshpande (2/37), who was given the ball in the final over, was able to defend 21 runs, restricting Rajasthan Royals to 148/8 in his debut IPL game. — PTI