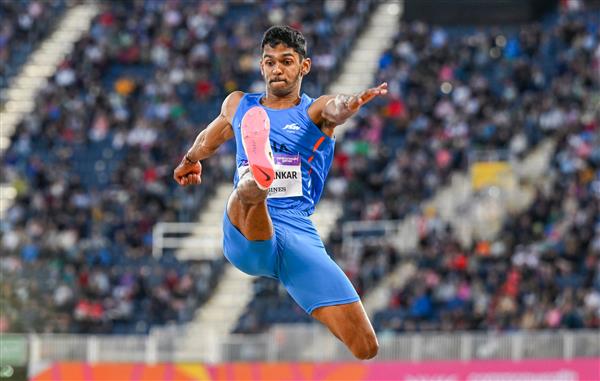 India’s Murali Sreeshankar clinched the silver medal in the men’s long jump event to give the country its second medal in track and field at the Commonwealth Games.

The 23-year-old national record holder soared to 8.08 metres in his fifth attempt to finish second behind Laquan Nairn of Bahamas in a nerve-racking final. Nairn also had a best jump of 8.08m but his second-best leap of 7.98m was better than Sreeshankar’s second-best of 7.84m.

According to the rules, if two jumpers are tied on the same distance, the one who has a better second-best effort will be ranked ahead. Jovan van Vuuren (8.06m) of South Africa took bronze.

The other Indian in the fray, Muhammed Anees Yahiya, ended fifth with a best jump of 7.97m.

Sreeshankar had come into the CWG as gold medal favourite on the basis of his season and personal best of 8.36m, which had put him in the joint second ranking in the world this season.

Having struggled on the first four jumps because of his landing on the footboard, he was not in contention for a medal at the end of the fourth round, being placed sixth at that stage. However, his fifth attempt of 8.08m took him to the second place.

In a dramatic final round, he seemed to have crossed the 8m mark — which would have given him gold — but to his and the Indian contingent’s disappointment, his foot landed 2cm ahead of the line on the footboard. This attempt was thus ruled a foul and Sreeshankar had to settle for silver.

Sreeshankar’s silver is the best result for an Indian male long jumper in the CWG. Suresh Babu had won the bronze in the 1978 edition. Among the women, Prajusha Maliakkal won the silver in the 2010 edition in Delhi, while the legendary Anju Bobby George bagged the bronze in 2002.

4 Sreeshankar is fourth Indian jumper since Suresh Babu (bronze in 1978), Anju Bobby George, and MA Prajusha (silver at New Delhi Games in 2010) to win a medal at the showpiece event.

He may have missed out on the cherished gold by the thinnest of margins, but the ever-smiling Murali Sreeshankar said this is just the beginning and he is hungry for more success.

The lanky youngster’s road to silver, however, was not that smooth as he slipped to the sixth spot after his 7.84m jump in the third attempt.

With two attempts remaining, the Keralite listened to his dad-cum-coach S Murali’s advice from the sidelines to execute a perfect 8.08m jump that rewarded him with a silver. “I’ve been waiting for a medal (at a global meet) for a very long time. I was seventh at World Indoor and World Outdoor, sixth at World Juniors, fourth Asian Indoors, sixth at Asian Games,” Sreeshankar said.

“Every time I was (finishing) 6th or 7th, so I was really happy with the silver. I have been waiting for a global medal for a very long time, but I kept missing out. This is a small step towards my big goal in the 2024 Paris Olympics and I’m working towards that,” he added.