Score with only 2 shots at goal, Barca miss chance to go to top 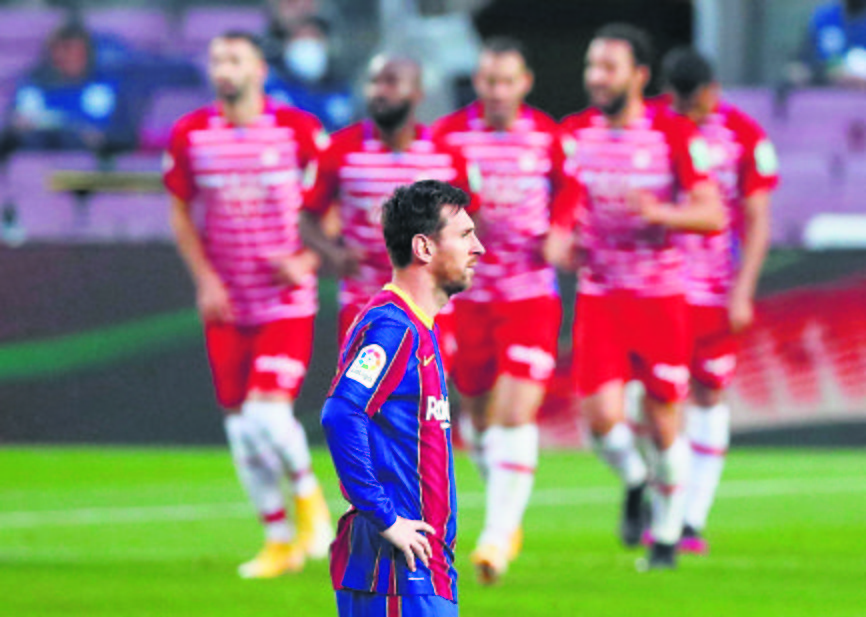 Barcelona missed a chance to take over the Spanish La Liga lead, losing 1-2 to Granada at home to squander an opportunity to take control of the title race. Lionel Messi put the Catalan club ahead in the first half but Granada rallied for a surprise victory with two second-half goals at the Camp Nou Stadium.

“It’s a tough blow,” Barcelona coach Ronald Koeman said. “It was a great opportunity for us.”

The match was postponed from two weeks ago because of Barcelona’s participation in the Copa del Rey final, which they won over Athletic Bilbao. A home win would have given Barcelona a one-point lead over Atletico Madrid with five rounds to go. Atletico, seeking their first league title since 2014, have led the league for most of the season but have struggled recently. They lost 1-2 at Athletic on Sunday.

Messi scored his fifth goal in his last four matches with a low cross shot from inside the area after a pass by Antoine Griezmann in the 23rd minute. It was Messi’s 26th league goal to increase his lead at the top of the scoring chart. He has five more than Real Madrid’s Karim Benzema.

Granada, sitting in eighth place, scored with their only two shots on target. They equalised through Venezuelan forward Darwin Machis on a breakaway in the 63rd, then got the winner with a 79th-minute header by Jorge Molina. The club from southern Spain was missing some of their regular starters because of injuries.

Koeman was sent off shortly after Granada’s first goal for complaining to the officiating crew. Koeman has been hit with a two-game ban and will miss the visit of Atletico next Saturday. Barcelona were seeking their third consecutive league win since they lost the Clasico against Real Madrid this month. — Agencies