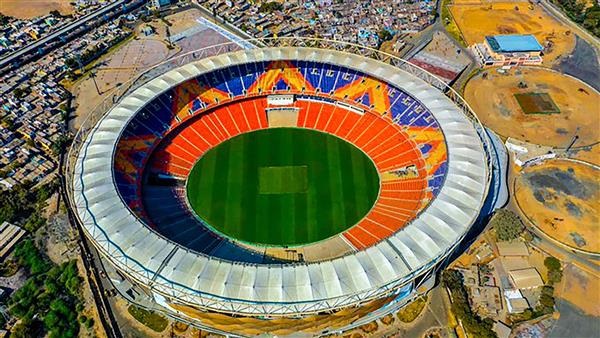 President Ram Nath Kovind on Wednesday inaugurated the Narendra Modi Stadium, which is now the world's largest cricket stadium with a seating capacity of 1,32,000 fans.

Spread over 63 acres, the Sardar Patel stadium, popularly known as the Motera Stadium, has 11 pitches in the square, besides possessing a unique sub-soil drainage system that helps in draining the wet ground in 30 minutes.

It is not a surprise that Narendra Modi Stadium, previously known as the Motera Stadium in Ahmedabad, Gujarat has pavillions named after Adani & Reliance. Waah Modi Ji Waah !https://t.co/DrmgWN8BQo pic.twitter.com/tvkYMcvRnC

"It is a coincidence that when the old stadium was being constructed the then President Giani Zail Singh was here. And now that it has been reconstructed and renamed after Honourable Prime Minister Narendra Modi I got the opportunity to be here," the President said after the inauguration ceremony.

Earlier, the President along with the First Lady Savita Kovind, also, performed the ‘bhumi pujan’ of the proposed Sardar Vallabhbhai Patel Sports Enclave.

Beautiful how the truth reveals itself.

Union Home Minister Amit Shah, who is also a member of Parliament from Gandhinagar, said the inauguration and plans for the sports enclave was only a start for bigger things.

"It will not be fair for me to talk about the stadium and not discuss our Prime Minister Narendra Bhai Modi's long term vision about sports," Shah said on the inauguration.

"When we went to get approval for the renovation of the old stadium Narendra bhai then was the CM. He told us 'we should stop thinking small about Gujarat. Gujarat me sirf bada hoga (think always big about Gujarat'," he said.

"Today Honourable President also performed the bhumi pujan of Sardar Vallabhbhai Patel Sports Enclave. Modiji first made this a heritage city and now we will become a sports city as well. Once ready, we will be able to host major meets in future be it Asian Games and Olympics," Home Minister said.

Also, present on the occasion was Sports Minister Kiren Rijiju, who thanked the PM for gifting India a major sports facility.

"As a young India, we would dream of a day when we can call the largest stadium as our own. I stand here as a proud Indian and Sports Minister when the world's largest Cricket stadium is here and the dream is realised," he said.

"It is not only the largest, it is also one of the most modern stadium, as well," he added.