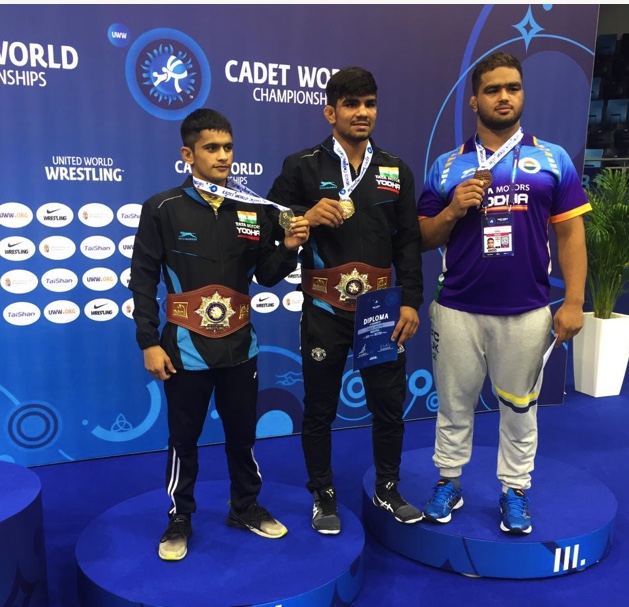 Sonepat wrestler Aman Gulia (48 kg) and Panipat lad Sagar Jaglan (80 kg) were crowned the new world champions in their respective categories at the Cadet World Championship in Budapest on Tuesday.

Patiala lad Jaskaran Singh beat Azerbaijan's Abdulrahman Ibrahimov 6-2 in the semifinals to assure himself a silver medal. He will take on Uzbekistan's Kamronbek Kadamov in the gold medal bout on Wednesday.

Sagar, 17, a trainee of Ashwani Attacking, in Kharkhoda village near Sonepat, hails from Neoltha village in Panipat.

Coach Ashwani Dahiya said, ''His grandfather and father used to wrestle in village akhadas. In 2019, Sagar won the gold medal in the Asian championships in Taiwan in the U-15 age category. This is his second medal at the international level. He has an aggressive style and scores over others in stamina.''

Much like Yogeshwar Dutt, the Sonepat lad has a penchant for using 'Fittle dav' at every possible opportunity. Sagar used 'Fittle' dav in three bouts to score over his opponents during the Cadet World Championship.

Aman Gulia hails from village Dobheta in Sonepat and used to train at Kasandi village akhada. Aman hails from a farmers' family with a modest background and used to cycle three kilometres daily at 4 am to reach akhada in Kasandi.

Coach Sandeep said, ''Aman conceded only three points in the championship. His favourite dav is 'Kalajang' but uses 'fittle' effortlessly. He is a fearless, intelligent wrestler and does not gives in till the last moment.''

Last year, he was selected in the Air Force boys team in Bangalore but returned home during the Covid-19 pandemic.