Hopefully it swings a bit in morning and we can get them: Jamieson

With the wickets of Mayank Agarwal, Shubman Gill and Ajinkya Rahane, the tall Jamieson left India stuttering at 145 for four in the second session 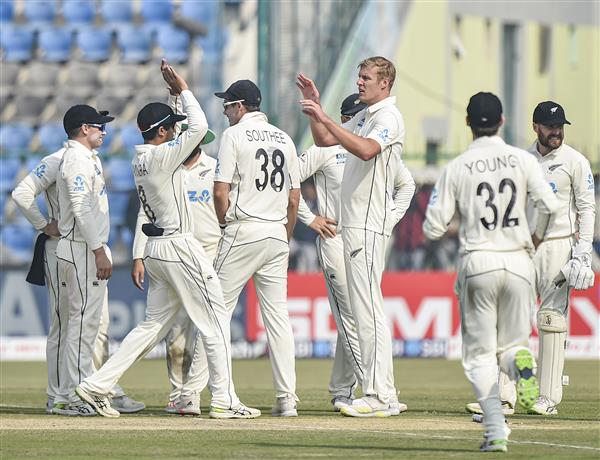 New Zealand team members celebrate the dismissal of Indian batsman Shubman Gill during day one of the 1st test cricket match between India and New Zealand, at Green Park stadium in Kanpur on November 25, 2021. PTI

New Zealand pacer Kyle Jamieson on Thursday said his team will need to make the most of the second new ball when play resumes on the second morning of the first Test against India here.

Their first aim will be to break the flourishing partnership between Shreyas Iyer and Ravindra Jadeja. By stumps on the first day, the two had put on 113 runs for the fifth wicket to take India to 254 for four, rescuing the hosts after a wobble in the second session.

"Hopefully the new ball swings a little bit in the morning and we can get them. We need a good start in the morning," Jamieson said after returning with impressive figures of 3 for 47.

With the wickets of Mayank Agarwal, Shubman Gill and Ajinkya Rahane, the tall Jamieson left India stuttering at 145 for four in the second session.

However, the duo of debutant Iyer and Jadeja handed the momentum back to India, and the Kiwi pacer had no qualms in admitting that.

"India fraction ahead I think. We hung around pretty well," he said.

On a surface with variable bounce, India did quite well to end the day at 258 for four after losing three wickets in the second session.

"Not a huge amount going on. Found some swing early and it was up and down a little bit." Appearing in only his third Test abroad, Jamieson is aware that the challenge of playing Test cricket in India will be different from what it is back home.

The 26-year-old was part of the New Zealand team that reached the final of the T20 World Cup but he did not get game time in the UAE. He also got injured in England.

"It's nice to be back out there. Probably I think not having game time in the IPL and World Cup gave me a chance to take a step back and work on a few things..." "Hardly played the last couple of months. Nice to get back onto the park." Jamieson, who has made a record-breaking start to Test cricket, with 49 wickets in just nine appearances (including the ongoing game), is on his first tour of the country with the national team.

As the Kiwis started their WTC title defence, Jamieson entered the scene with five five-wicket hauls and an incredible average of 14.17 in the five-day format.

"I am not trying to change my game... very lucky to have guys like Tim (Southee) and Wags (Neil Wagner) with me.. I think we re pretty good, we had our discussion before the game on how to go about things.

"Lucky to get some movement early on.. little bit of reverse in the middle. We do know the nature of the pitch (here), they do tend to break up." PTI