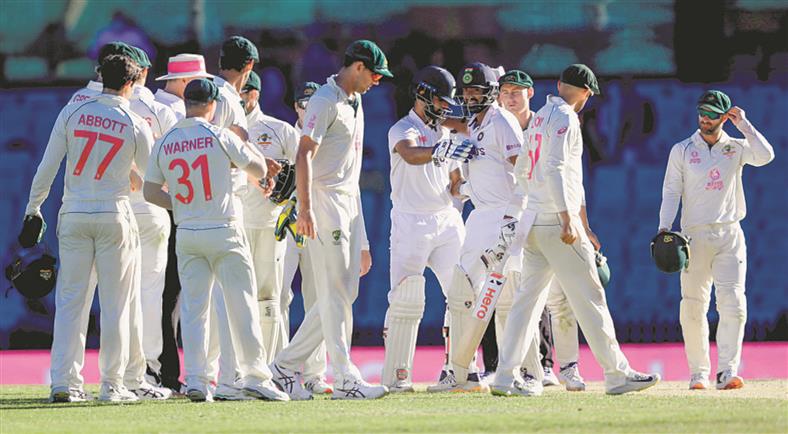 Hanuma Vihari and Ravichandran Ashwin celebrate after securing the draw against Australia. AP/PTI

A battered and bruised India team batted with great resilience through the final day to snatch a remarkable draw in the third Test against Australia here today, leaving an engrossing series tied at 1-1 heading into the final match in Brisbane.

This is as good as winning a Test match. When you come abroad and play a match like this, it was really special, as I said. It’s as good as victory

A hobbling Hanuma Vihari combined with Ravichandran Ashwin to defy Australia’s attack in a partnership over the last three hours of the match that kept alive India’s hopes of a second successive series triumph Down Under.

The sixth-wicket stand was worth only 62 runs but immeasurably more in terms of morale for a squad that has endured quarantine, alleged racial abuse from fans and a catalogue of injuries.

We certainly created chances to win the game. Just did not hold our catches, myself in particular. We have to cop the blame for that, wear it, move on and look forward to Brisbane

“Our talk this morning was all about showing character, fight till the end and not thinking of the result,” said India skipper Ajinkya Rahane. “A special mention to Vihari and Ashwin, the way they batted and showed their character. Looking forward to Brisbane now.”

Australia’s frontline bowlers, who skittled the tourists for 36 in the first Test, threw everything they had at the Indian batsmen on a Day 5 wicket at Sydney Cricket Ground that did not deteriorate as much as they had hoped. India finished on 334 for five, 73 runs short of the victory target of 407 that Australia had handed them after declaring on 312/6 at tea on Sunday.

“We certainly created chances to win the game. Just did not hold our catches, myself in particular,” said Australia captain and wicketkeeper Tim Paine.

“We have to cop the blame for that, wear it, move on and look forward to Brisbane.”

A brilliant 97 from Rishabh Pant and a typically obdurate 77 from Cheteshwar Pujara had given India a glimmer of hope that they might just be able to chase down their imposing target.

Pant, who was a serious injury doubt on Saturday after taking a nasty blow to his elbow, slugged 12 fours and three sixes to take the game to the Australians.

The pair put on 148 for the fourth wicket before Pant was caught at backward point three runs shy of his century to give off-spinner Nathan Lyon his second wicket of the day. It was huge relief to the home side, who must have had flashbacks to Ben Stokes’s innings of 135 not out at Leeds in the 2019 Ashes that enabled England to snatch victory from the jaws of defeat. Pujara was the chalk to Pant’s cheese, eking out his runs from 205 deliveries over 285 minutes before Josh Hazlewood finally got something out of the second new ball to penetrate his defence and shatter his wickets.

Once they departed, however, a draw was clearly the only target for India.

Vihari, clearly hampered by a hamstring injury suffered while running for a single before tea, scored at a rate that made Pujara look like a limited overs slogger.

Vihari’s 23 runs came from 161 deliveries, while Ashwin was barely more expansive with 39 from 128 balls. At one stage, 41 deliveries passed without a run being scored.

Ashwin came out to bat ahead of Ravindra Jadeja, who dislocated his left thumb in the first innings to add to India’s long injury list.

Steve Smith was named Man of the Match for his innings of 131 and 81 and Australia will be hoping he maintains his form at the Gabba, where they are unbeaten in 31 Tests going back to 1988. — Reuters

256 Balls Hanuma Vihari and R Ashwin faced in their sixth-wicket partnership. There have only been three times when more balls were played for the sixth wicket in the fourth innings in a win or a draw

148 Runs added by Cheteshwar Pujara and Rishabh Pant for the fourth wicket. This is the highest fourth-innings fourth-wicket stand for India. It broke a 72-year-old record held by Vijay Hazare and Rusi Modi, who added 139 against West Indies in Mumbai

Really proud of Team India! Special mention to Rishabh Pant, Cheteshwar, Ashwin Ravi and Hanuma Vihari for the roles they’ve played brilliantly. Any guesses in which dressing room the morale will be high. Sachin Tendulkar

Hope all of us realise the importance of Pujara, Pant and Ashwin in cricket teams… Batting at 3 in Test cricket against quality bowling is not always hitting through the line… Almost 400 Test wickets don’t come just like that. Well fought India. Time to win the series. Sourav Ganguly

Loved the fight and determination of India all day today. Starting with Pant and Pujara, and then for Vihari and Ashwin to withstand Australia and look largely in control for most of the day was very impressive. Can’t wait for Brisbane now. Ricky Ponting

...Feel so so proud of the team. Pant showed why he needs to be treated differently and grit showed by Vihari, Pujara and Ashwin was unbelievable. Virender Sehwag

Even a half-strength, battled, bruised, injured, ridiculed, abused, bio-bubble fatigued India is difficult for a full strength Australia to beat at home. No praise high enough for this herculean effort. Wasim Jaffer