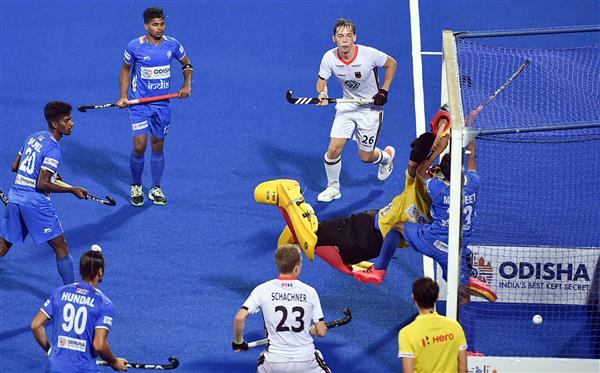 India concede their second goal to Germany in their semifinals clash. PTI

Germany will meet Argentina in the summit clash on Sunday, while India will play France for the bronze medal. India had lost 4-5 against France in their opener of the pool stage.

India’s game was in stark contrast to the way they played against Belgium in the quarterfinals. While their defence was extraordinary in the last match, the backline was caught napping by the Germans. There was no cohesion between the midfield and forwardline.

Germany played better under the constant drizzle compared to the hosts, who faltered in trapping the ball in the wet conditions.

Earlier, former champions Argentina ended France’s dream run by registering a shootout win in the first semifinal. After the regulation 60 minutes ended goalless, 2005 champions Argentina kept their composure in the shootout to win 3-1. The match ended on a bad note as tempers flared after Lucas Montecot missed France’s fourth attempt.

Last edition’s runners-up Belgium made a valiant fightback from two goals down to beat Spain 4-3 in the penalty shootout in a classification match. Belgium will face the Netherlands, who thrashed Malaysia 9-3, in the fifth-sixth places play-off. — PTI

Bhubaneswar: Covid-19 hit the event here after an incident-free week with one positive case being reported today. Despite being held inside a bio-bubble and all mediapersons covering the event subjected to RT-PCR tests every 48 hours, one person, who has been accessing the media centre at the Kalinga Stadium, tested positive on Thursday. The person is a social media team member of the Department of Sports and Youth Services (DSYS), Odisha government. PTI