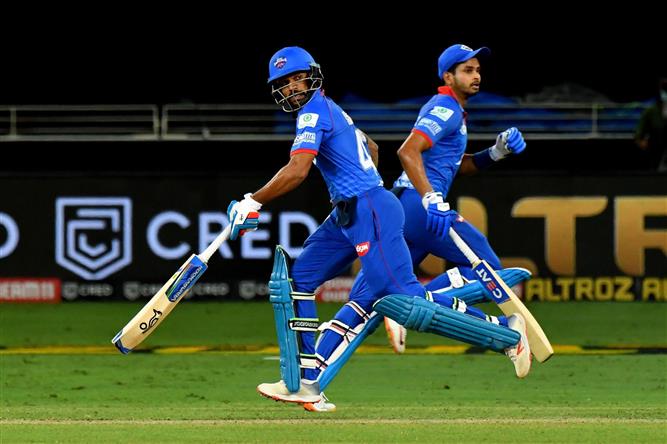 Delhi Capitals captain Shreyas Iyer and Shikar Dhawan during their IPL match against Rajasthan Royals at the Dubai International Cricket Stadium in Dubai on Wednesday. IPL

Flavour of the season Rahul Tewatia didn't prove to be third time lucky in what turned out to be an incredible death overs performance by the Delhi Capitals pace attack in their 13-run victory in an IPL game on Wednesday.

Anrich Nortje (2/33) was breathtakingly fast bowling in the mid 150 kmph with toe-crushing yorkers while Kagiso Rabada's (1/28) international experience proved to be pure gold dust leaving rookie Tushar Deshpande (2/37) to defend 21 runs in his debut IPL game, which he did with elan.

The result was Rajasthan Royals finishing on 148 for 8 chasing Delhi Capitals' par score of 161 for 7 as Tewatia couldn't hit the troika of Rabada, Nortje and Deshpande at all.

Royals lost the plot in the last five overs partly due to selfish approach from senior player Robin Uthappa (32 off 27 balls), who needlessly ran-out a genuine match-winner Riyan Parag.

While skipper Shreyas Iyer's shoulder injury would keep Capitals on tenterhooks, 12 points from 8 games will keep them in good stead as they look to quickly clinch a play-off place. Rajasthan Royals with 6 points from 8 games stay in seventh place and are in danger of missing another play-offs.

While DC were splendid at the death, it was Ravichandran Ashwin's artistry during the back 10 with clever variations of pace and flight that brought Delhi back in the game. Ashwin finished with figures of 1 for 17 and bowled 10 dot balls out of his 24 balls -- on par with the ever-improving Nortje.

Earlier Shikhar Dhawan and skipper Iyer hit stroke-filled half-centuries but Delhi Capitals lost momentum towards the end to be restricted to 161 for seven after opting to bat first.

The last five overs of the Delhi Capitals innings yielded only 32 runs and they lost four wickets, an indication how they missed Rishabh Pant and Shimron Hetmyer.

DC had a disastrous start to its innings after opting to bat as it lost Prithvi Shaw off the first ball of the match with a gem of a delivery from Jofra Archer (3/19) that jagged back in after pitching and crashed into the middle stump after getting an inside edge.

To make matters worse for DC, Ajinkya Rahane was holed out to Robin Uthappa off Archer at mid-on an over later.

But then skipper Iyer (53 off 43) joined hands with Dhawan (57 off 33) and the duo initially played cautiously before opening up to take DC forward.

They shared 85 runs for the third wicket off 55 balls to keep DC's momentum going after the early jolts.

Dhawan looked in great nick from the onset, often finding the boundary with his trademark pulls and shots square off the off side.

In the process he scored his 39th fifty in the IPL off just 30 balls but soon after reaching the feat he departed while trying to force the pacer, caught at short third man by Kartik Tyagi off leg-spinner Shreyas Gopal.

His runs came off 33 balls which had six boundaries and two hits over the fence.

After Dhawan's dismissal, Iyer took the onus on himself and upped the ante with some lusty hits and in the process got to his fifty off 40 balls in the 15th over bowled by Jaydev Unadkat, that yielded 17 runs, including two sixes.

But soon after, Iyer departed, caught by Archer at long-off off Kartik Tyagi as he went for another big hit.

Marcus Stoinis (18) and Alex Carey (14) tried their best to add muscle to the scoreboard but were unsuccessful. PTI