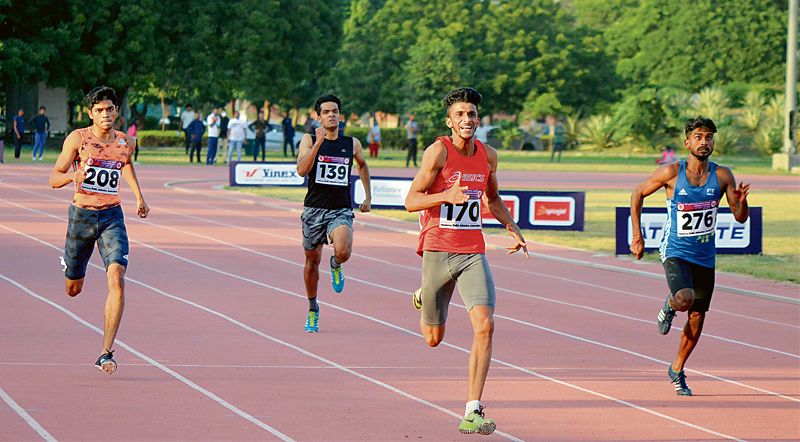 It is rare to see athletes from Jammu & Kashmir participate in national competitions. It is rarer to see them win medals. On Tuesday, 18-year-old Abrar Choudhary clocked 48.56 seconds to clinch the gold medal in the boys’ under-20 final of the National Open 400m Championships.

Remarkably, Choudhary, a resident of Sainik Colony Chowadi in Jammu, started taking track racing seriously only 10 months ago. Previously, he wanted to pursue kickboxing. For endurance, Choudhary used to run five kilometres. He would take part in the state trials and end up representing J&K, starting from the school nationals. However, he was hooked to the sport after seeing other young athletes excel. After a chance meeting with Rohtash Siwach, Abrar took a decision to shift base to Rohtak, Haryana, to train.

For Choudhary, while his training and his progression in sport is going well, life on the road has been problematic, as he knows he cannot lean on his farmer father Mohammad Hanif for finances.

“I have to think a lot about what I need to buy. Most times I have to hold back as I cannot ask for more. My father and my family have done enough already,” Choudhary said.

“I have only one pair of spikes that I bought 10 months ago. The kit that I wore to win today is old as well. There is a clear tear at the sides. It is OK, I am surviving. I know I have the potential and if by any chance I get called to the national camp then I can do wonders,” he added.

On the performance side, the Jammu boy has been on the upward graph. At the North Zone Junior Athletics Championships held in Meerut early this year, Choudhary won the U-20 400m race with a timing of 49.8 seconds. He also bagged the silver medal in 200m. He was a finalist in the Junior National Championships held in Guwahati.

“When he came to me he was running 400m in 58 seconds and today he clocked 48.56. The best thing is that he outran some of the boys who beat him at the Junior Nationals,” Siwach said.

The day’s dominating performance came from Uttar Pradesh’s Rupal who won the girls’ U-18 final with a massive difference of 4.32 seconds. Rupal clocked 53.75 seconds to win the gold ahead of Tamil Nadu’s P.R. Neeharika, who finished a distant second with a timing of 58.07 seconds. Karnataka’s Nayana Kokare finished in the bronze medal position.

In the men’s category, young and upcoming star Ayush Dabas from Haryana registered another sub-47 seconds race to win the 400m gold medal. Dabas clocked 46.86 seconds to finish ahead of TN’s Surendar S. Selvamani and Punjab’s Harpreet Singh Gill, who finished second and third with a timing of 47.76 and 48.13, respectively.