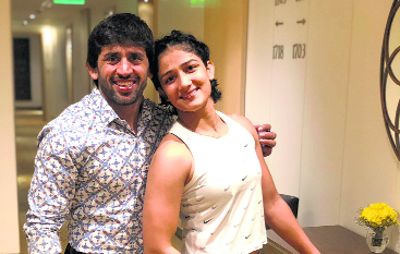 Bajrang Punia and Sangeeta Phogat will get married on November 25. photo: Sangeeta phogat/twitter

Wrestler Bajrang Punia is set to marry Sangeeta Phogat in a scaled-down ceremony in his Khudan village in Jhajjar in Haryana on November 25. The marriage was originally planned to be held after this year’s Olympic Games, where were to end on August 9. However, the Olympics were postponed, and the two families decided to go ahead with the wedding in November. Talking with The Tribune, the 26-year-old Bajrang talked about his plans as a wrestler after marriage. Excerpts:

Your marriage plans raised quite a few eyebrows in the wrestling fraternity. Was the wedding always planned for this year?

Our original plan was to get married after the Olympics and the parents had already decided on the dates but once the Olympics were postponed, we are going forward with it.

Getting married during Covid-19 is a big thing. Your comments?

Frankly speaking, our parents always wanted to have a grand ceremony. However, I see this as God’s will. It had to happen this way only. All the marriages have been a grand affair in my family but it cannot happen in these times. There are certain guidelines that have to be followed and I think the government rules suggest that we cannot have a gathering of over 150 persons and we will abide by it.

How happy are you about

I am very happy as I am getting a life partner. We have a saying in our families that ‘with a new partner you will get better luck’! And if so, then I am looking forward to winning more medals.

How will you balance marriage

I do not think me getting married will affect my preparations for the Olympics in any way. Sangeeta is also an aspiring wrestler and will continue to train and so will I. I am leaving for a tournament in the USA immediately after my marriage… I think I will leave after four days, so to think that it will affect my training will be wrong.

You are to take part in the eight-man prize money tournament in Texas that also includes Jordan Oliver, James Green, Anthony Ashnault, Joey McKenna, Evan Henderson, Pat Lugo and Bryce Meredith. Tell us about it.

I got an invite from the organisers 15-20 days back and then I told them that I was keen on competing at the World Championships but later on, I gave them my consent when the World Championships was cancelled. The tournament will be an important factor, as it will tell us where we stand in terms of performance, as I have not competed for a long time. It will show me where I am lacking in power, stamina or speed, so that is why I am going there.

You have further plans to stay in the US, right?

It will be a month-long training session as after the tournament I will head to a facility near the Michigan University to train. They have assured me that they will provide me 8-10 sparring partners.

There has been a longstanding saying in the Indian wrestling fraternity that a wrestler starts to lose his edge after marriage. What do you have to say about this?