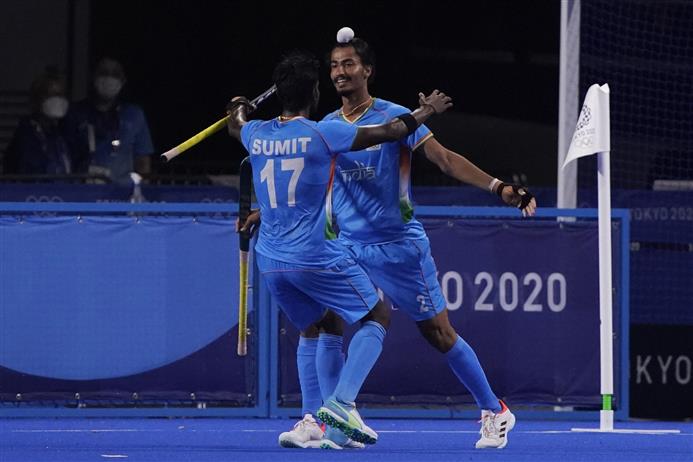 India's Dilpreet Singh, right, celebrates with Sumit (17) after scoring during a men's field hockey match against Britain at the 2020 Summer Olympics, Sunday, August 1, 2021, in Tokyo. AP/PTI

The Indian men’s hockey team defeated Great Britain 3-1 in a quarterfinal match to qualify for the semifinals of Olympics Games after 49 years here on Sunday.

The lone goal for Great Britain was scored by Sam Ward in the 45th minute.

Even though India’s last of the eight Olympic gold medals came way back in 1980 Moscow Games, there were no semifinals in that edition as only six teams participated in the event.

The last time India featured in the semifinals of the Olympics was in 1972 Munich Games where they lost 0-2 to arch-rivals Pakistan.

India will take on world champions Belgium in the semifinal on Tuesday.

Belgium defeated Spain 3-1 in another quarterfinal to seal their place in the last four round.

The other semifinal of the men’s hockey competition will be played between Australia and Germany. PTI

Dilpreet Singh scores India's first goal for the day in his 5⃣0⃣th game.