Our bench strength is extremely strong, it will help when transition happens: Kohli

Rohit’s knock was the defining moment in Chennai, and Ashwin has been our most bankable player over the years so they have been our best players this series, the Indian captain feels 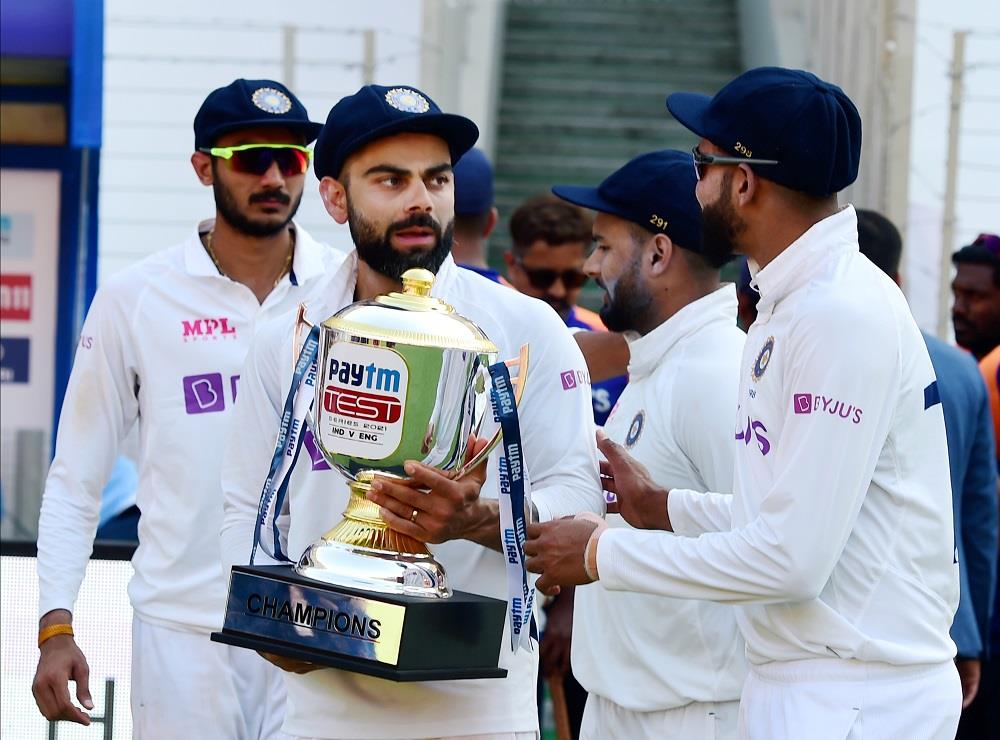 India’s supremely talented bench strength has made skipper Virat Kohli quite confident that the team will have a relatively smooth ride when the transition period dawns upon it in the next few years.

With the rise of several young players such as Washington Sundar, Mohammed Siraj and Rishabh Pant, India have been on a roll both at home and abroad. On Saturday, the side humbled England 3-1 after clinching the fourth and final Test by an innings and 25 runs here.

This was after an embarrassing 227-run loss in the first Test.

“The comeback in Chennai pleased me the most. The first game was an aberration and England outplayed us. The toss played a crucial role and the bowlers weren’t in the contest. We bowled and fielded with more intensity and so the comeback was very heartening,” Kohli said at the post-match presentation.

“Our bench strength is extremely strong and that’s a good sign for Indian cricket. When the transition happens, the standards won’t fall and Rishabh and Washy’s partnership showed exactly that in a crucial juncture of the match,” Kohli added.

Had chances to get on top but we did not manage: Root

After notching up victories in the second and third Tests, respectively, India won the fourth match inside three days.

“We had to pick up our body language after the first game in Chennai. Every team in international cricket is a quality side and we need to work hard to beat them, even at home. Keeping that intensity going is most important and is the hallmark of our team,” Kohli said.

Star opener Rohit Sharma scored 161 in the first innings of the second Test and the skipper feels the knock changed the complexion of the series alongside seasoned spinner Ravichandran Ashwin’s performance of 32 wickets.

“Rohit’s knock was the defining moment in Chennai, and Ashwin has been our most bankable player over the years so they have been our best players this series. Now we can accept that the World Test Championship final, which was a distraction in New Zealand in 2020, but now it’s a reality,” Kohli said.

Ashwin, who ended the series with 32 wickets and a century, was named man of the series and the spinner was delighted to qualify for the WTC final, adding that the win was a collective effort.

“The fact that we qualified for the WTC final is very important. The intensity was low after Chennai, despite the high in Australia. Every time there was a challenging time in the series, someone put their hand up, so this series win was right up there,” Ashwin said.

Ashwin also lauded Rishabh Pant, saying it is unfair to compare the young wicketkeeper batsman to legends of the game.

“If you put a board on what Rishabh has gone through in the last year, it’s been a little unfair being compared to legends, and the way he’s come out of it and kept in this series has been excellent. Axar (Patel) is someone who came into replace Jaddu. He deserved all the praise and he was very accurate for someone playing his first series,” he added.

England skipper Joe Root conceded that his team was outplayed by the hosts in the series.

“The first game was a positive. We haven’t matched India in the last three, and we need to keep learning and keep getting better for this experience and this series,” Root said.

“There are some key areas where India grabbed the game and we didn’t. Washington (Sundar) and Rishabh played extremely well at a time when we had a good hold on the game. We also didn’t score runs the way we would have liked, and India outplayed us,” the Indian captain said.

“It’s really important that we have to look after our players in terms of resting them, and we can’t keep playing them until they fall over. We need to look after them and rotate them as necessary,” Kohli concluded. PTI