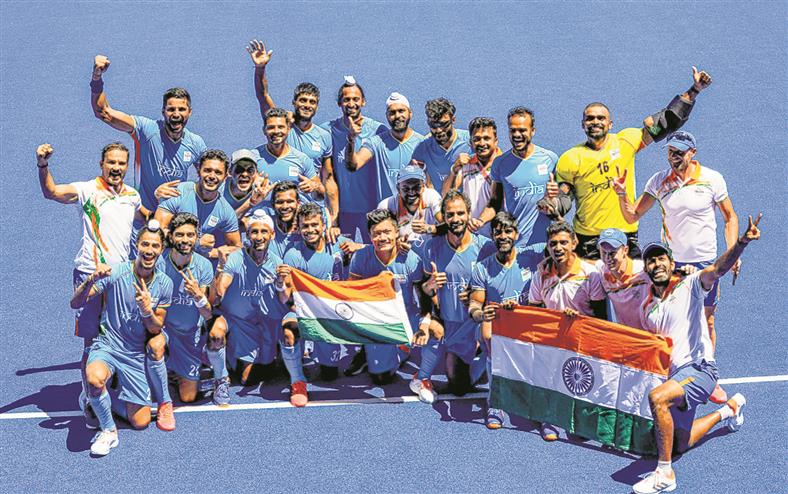 The roar of Simranjeet, the muscle of Rupinder, the dragflick of Harmanpreet, the joy of Sreejesh. A day to remember. A day India had been waiting for since decades. Winning the Tokyo Olympics bronze medal playoff 5-4 against Germany, champions in 2012 and bronze winners in 2016, after being 1-3 down makes it India’s greatest win in a very, very long time.

The entire country is proud of you. — Narendra Modi, PM

It has made me travel 41 years down memory lane. — Manmohan Singh, Ex-PM

A fantastic feeling... privileged to be a part of game’s revival in India. — Graham Reid, Coach

We dedicate this medal to doctors and frontline health workers who have saved lives in India — Manpreet Singh, captain

India conceded a penalty corner 6 seconds from the final hooter, but Sreejesh & the defence once again came to the side’s rescue.

August 5, 2021, the day will forever live in the memory of generations of hockey fans who waited decades to witness India win an Olympics medal. For fans who backed the men’s team through thick and thin — who witnessed the near-misses of 1984, 1996 or 2000 or the humiliation of 2008 or 2012 — it was a day of relief, ecstasy and vindication. 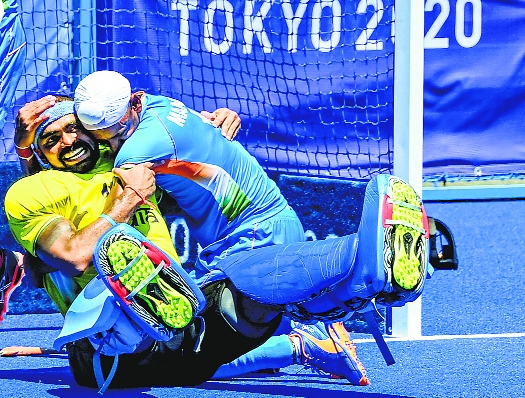 After decades of disappointment, the Indian team found a way to end the nation’s 41-year wait for a medal. And they did it in the most dramatic ways, bouncing back from two goals down to beat Germany 5-4. After a nervous start, the game ended with the Indian team producing one of its grittiest and most steady performances in a long time.

Germany came prepared for the match while India looked lacklustre to start with. The scoreline read 1-0 for Germany. Timur Oruz scored in the second minute, and the goal spurred the Germans further. Despite conceding the equaliser, Simranjeet Singh finishing with a quickfire shot in the 17th minute, Germany completely dominated the major part of the first half. With five minutes to go in the first half, Germany were 3-1 up. Struggling to cope with the lively Germans, India earned a penalty corner against the run of play in the 27th minute. The goalkeeper saved the initial dragflick but could not keep out Hardik’s flick from the rebound. The goal brought the Indian players alive. Two minutes later, Harmanpreet Singh, the team’s top-scorer in the tournament, converted another penalty corner to bring the team level.

The Indians came out blazing in the second half. A minute in, Mandeep Singh earned a penalty stroke, which Rupinder Pal Singh converted with ease.

With Germany pushing forwards for the equaliser, India found space and hit again. Simranjeet slapped in a pass from Gurjant Singh after a swift counter-attack in the 34th minute. After that it was a show of grit from India.

When Lukas Windfeder reduced the deficit to one goal, there were 12 minutes to go. But India held on. And when PR Sreejesh slapped away Windfeder’s drag-flick in the dying seconds, the Indian team knew they had made history. Captain Manpreet Singh fell to the ground and wept.

Hours later, when Manpreet got to hold the bronze medal for the first time, he couldn’t stop smiling.

Silver for Dahiya
‘Will try for gold AT Paris’ 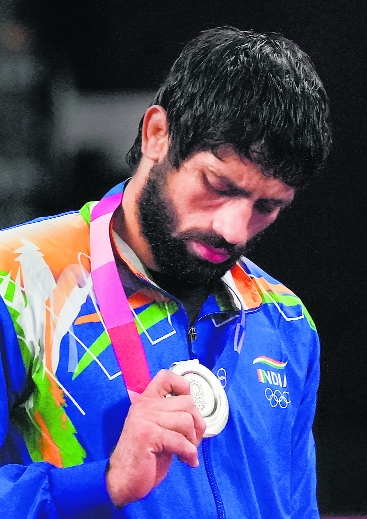 Gracious in defeat, young Indian wrestler Ravi Dahiya on Thursday said he would strive to get better and complete the unfinished task of winning a gold at the 2024 Paris Games. Dahiya lost to world champion Zavur Uguev in the final. His coach Mahabali Satpal said Dahiya was fighting from the front and the coaches in Tokyo should have advised him to wrestle from the sides. He has coached Dahiya since he was 12.

Vinesh Phogat’s redemption dream came crashing down after a shock quarterfinal exit and Deepak Punia let slip a bronze in the last 10 seconds of his playoff bout in Tokyo on Thursday.

The Indian women’s hockey team will look to notch up its maiden podium finish at the Olympics when it takes on Great Britain in the bronze medal playoff on Friday.